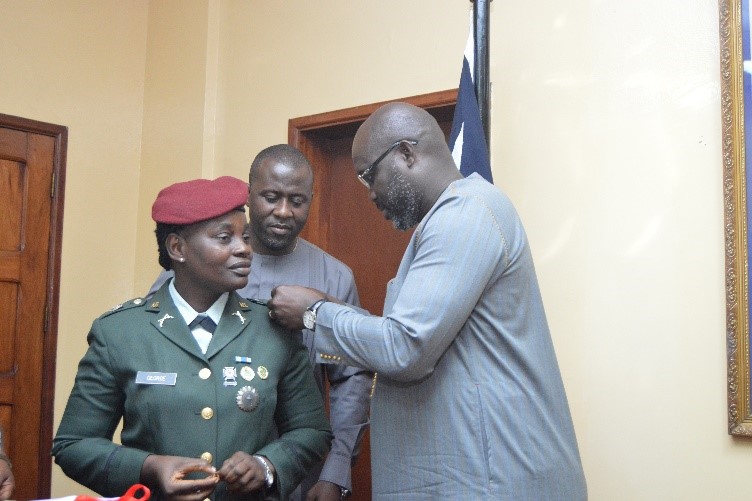 Monrovia, Liberia: His Excellency President George Manneh Weah, Commander-in-Chief of the Armed Forces of Liberia (AFL), has pinned and commissioned Colonel Geraldine Janet George as the first female Brigadier General of the AFL.

In administering the oath, on June 1, 2018, the President congratulated senior officer for her preferment, emphasizing that “This honor is for the Liberian people, please do due diligence to your Country.”

The President further admonished the honoree to do the people’s work. “Whenever you encountered difficult issues, consult others instead of going to the media,” the President intimated.

In her response, Brig. /Gen. George thanked the President for promoting her and pledged her full support in achieving the Government’s Pro-poor agenda for the men and women of the AFL.

“My pinning and commissioning to the rank of Brigadier General and as the Deputy Chief of Staff of the AFL by the Commander-in-Chief in the presence of these dignitaries today shows the respect and confidence you all have in the AFL and in my capacity to play my part in assisting the AFL Chief of Staff band by extension our president who is the Commander-in-Chief in carrying out his plans to develop our country, Liberia and positioning the AFL as a force for good,” Brig. /Gen. George stated.

She said that she is aware that her promotion comes with added challenges and responsibilities, but as a trained officer and a mother, she pledged to do her best first from her military background and secondly with her motherly instinct. “With the support of all the members of the AFL and my bosses who have always stood by me, I am optimistic, I will succeed in my duties in this new capacity,” she assured. 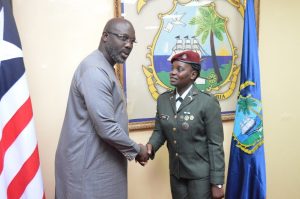 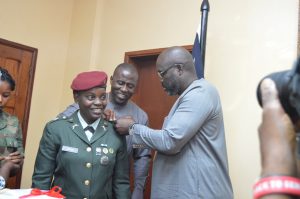