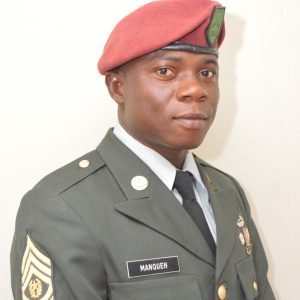 Command Sergeant Major (CSM) Cooper Manqueh was born on 26th July 1975 in Zayglay Town, Nimba County. He is a Christian and married with four children. He earned his high school education from the S Trowen Nagbe United Methodist High school in Ganta City, Nimba County. He obtained a Bachelor degree in Accounting from the Stella Maris Polytechnic in 2015.

He joined the Armed Forces of Liberia on 22nd July, 2006 as a member of the first batch of recruits for the New Armed Forces of Liberia formulation. He was selected for the Basic Non-Commissioned Officer (NCO) Course that automatically qualified him upon completion for sergeant. He was privileged to attend the Officer Candidate Course at Barclay Training Centre (BTC) under the DYNCORP administration.

He had worked with the Monrovia Young Men Christian Association (YMCA) Account Section.