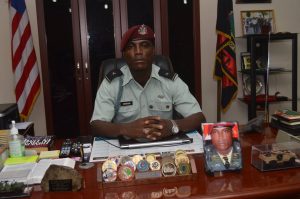 Honorable Daniel Dee Ziankahn, Jr., became the first Liberian postwar Chief of Staff of the Armed Forces of Liberia. He is one of Liberia’s most decorated retired senior military leaders. He holds several distinctions and is a practical, but rare leader that Liberia’s defense architecture needs at this time. 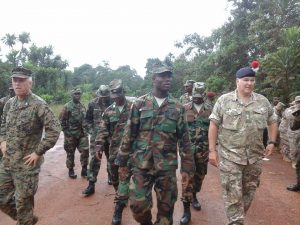 After completing the Initial Entry Training (IET) and Advanced Individual Training (AIT) in Liberia, he was commissioned into the Armed Forces of Liberia in 2006. He then furthered his military knowledge by attending the Basic Non-Commissioned Officer Course (BNCOC) and Officers Candidate School(OCS) in Liberia. The retired General, Minister Ziankahn, had his Basic Officer Leader Course II(BOLC II) and Infantry Basic Officer Course (IBOLC III) at Fort Benning, GA, United States of America. Also, Honorable Ziankahn had his Basic Airborne Course in Fort Benning, GA, United States of America. Progressively, this astute retired military leader attended the Armor Company Commander Course in the Arab Republic of Egypt and Junior Staff Course (JSC) at the Horton Academy in Freetown, Sierra Leone. 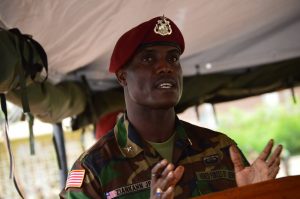 He has in his honor several achievement few of which include: Leadership Award– Officers Candidate School(OCS); First in the Order of Merit– Lieutenant to Captain Promotion Exam; Runner-up- for the coveted Barrier-Brookes Award for the best Master’s Thesis; Honorary Citizen Leavenworth City, Kansas, United States of America, Distinguished Medal of Honor: The City of Duala, Cameroon; The Order of Saint Maurice award in the rank of Peregrinus, The National Infantry Association(NIA) Columbus, Georgia USA; and Distinguished Service Medal (Recipient), Michigan, USA. 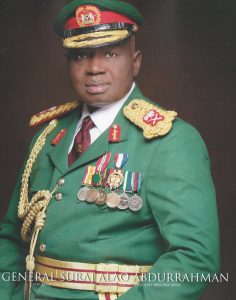 Major General Suraj Alao Abdurrahman was born on 9 September 1954 in Kaduna where he had his primary education before proceeding to government college Keffi for his secondary education. He graduated with division 1 distinction in the West Africa school certificate examination in 1972. He thereafter proceeded to the School of Basic Studies of the Ahmadu Bello University Zaria, Kaduna where was until July 1973 when he was admitted into the prestigious Nigeria Defence Academy Kaduna as a member of the 14th regular Combatant Course.

In 1975, he was commissioned as a Second Lieutenant into the Nigeria Army Corps of Engineers. In the course of his Service, General Abdurrahman attended various military and civil courses. He was an alumnus of the Nigerian Army School of Military Engineers (NASME). Nigerian Armed Forces Command and Staff College (AFCSC) as well as the National War College where he graduated with distinction. The General also holds BSc: (Arch.) and M.Sc. (Arch.) from the Ahmadu Bello University as well as PhD (Arch.) from the Herriot-Watt University in Edinburg (UK).

General Abdurrahman was also an alumnus of the UK Joint Warfare Center-Southwick (UK). Additionally, the senior officer attended the Leadership in Developing countries Course at the Harvard University, Cambridge, USA and Senior Security Officer Course in the same institution in 2010. Furthermore, the General attended the senior Executive Course on Cybercrime in 2011 at the George Marshall Center, Garmisch in Germany. The senior officer has held several command, instructor and staff appointments in the course of his career both locally and internationally. They include General Staff Officer Grade 3 Training at the Engineer Headquarters in 1976, Staff 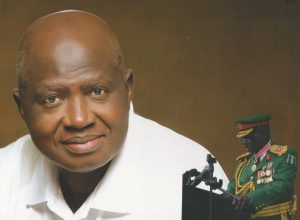 Officer Architecture at Army Headquarters (AHQ) in 1981, He was instructor in NASME in 1986. He commanded the 21 Support Engineer Regiment, 13 Field Engineers Regiment and later became commander of the 43 Engineer Brigade.

He served as Colonel Personnel Service in the Department of Army Administration at AHQ in 1998 and Director of Army Real Estate at the Engineer Headquarters in 2001. He also served as Military Observer with the United Nation Iraq-Kuwait Observer Mission (UNIKOM) in 1991 and as commander of 3 Division Internal Security Task Force (OP FLUSH OUT II) in 1999. General Abdurrahman further served as a Directing staff at the AFCSC, Ghana Armed Forces Command and Staff College and the Nigerian National Defence College. He represented Nigeria at the UN Conference on Anti-Personnel Mines Convention in Switzerland, Ethiopia and Kenya.

General Abdurrahman was also in Namibia to represent Nigeria at the UN Small Arms and Light Weapons Conference, he also participated in the “BLUE HELMET FORUM AUSTRIA 2005” in Austria. He was the Director of Operations in AHQ until January when he was promoted to the rank of Major General and redeployed to Defence Headquarters as the Director of Policy. In January 2006, he was appointed the Chief of Army Staff Standards and Evaluation in AHQ a position he held until June 2006 when was appointed Chief of Training and Operations – AHQ. In January 2007, he became the Chief of Policy and Plans for Nigerian Army. It was from here that he was appointed the Chief of Staff, Armed Forces of Liberia (AFL). He effectively commanded the AFL from6 June 2007 to 11 Feb 2014, when he handed over to a Liberian Officer. 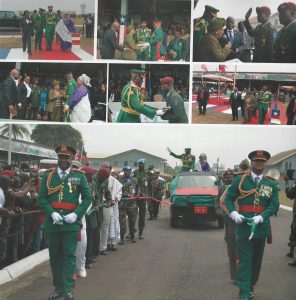