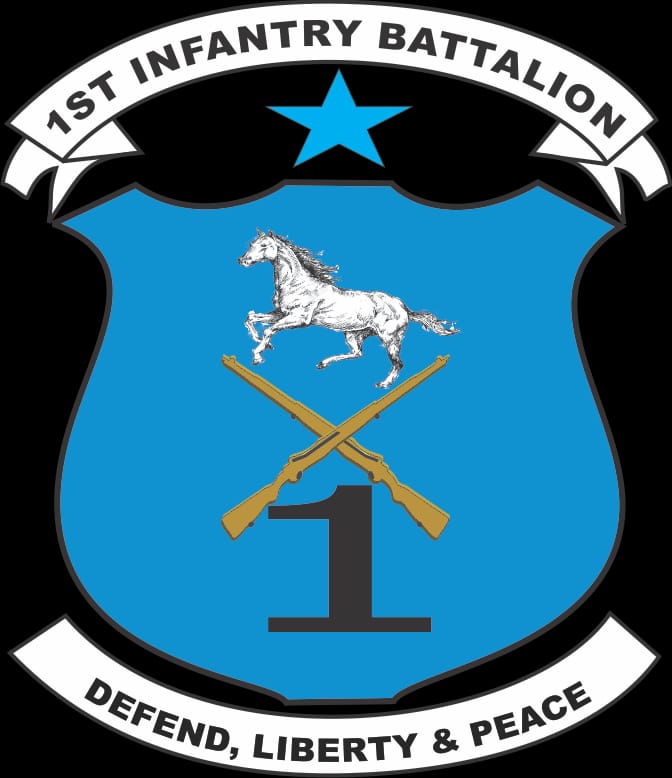 The First Infantry Battalion (1Bn) with its headquarter in Schiefflin, Margibi County, was the first unit in the Armed Forces of Liberia (AFL) to be activated. The Bn was activated on 29 August 2008 at the Barclay Training Center as the result to improve the capacity of the 23rd Infantry Brigade to participate in external and internal security operations, disaster relief and humanitarian activities and to counter perceived threats within our borders. As mentioned, the Bn has been successful in implementing her duties.

Since its establishment, the unite has assiduously been discharging its assigned responsibilities and have been involved in several Low Intensive Conflict Operations, United Nations Missions, Cordon and Search, Routine and Special Patrol tasks, Check Points, Escort duties and amongst other operations.

Significant successes have been achieved by the Bn since its inception in areas such as: Discipline, AWOL, MOS Qualification, Accommodation, Welfare and Self Development. Just like any other infantry (Inf) units, the Bn Motto is “Defence Life Liberty and Peace Hua”. This motto came from the unique background of its duties and responsibilities as stated above.

Personnel.     Currently, the Bn has an Operational Strength of 374 personnel of all ranks. (19 x Officers, 323x NCOs, 16x Cpl, 15x Pfc and 1 x pvt). This means that the Bn is under strength and it need 272x personnel to meet the authorized strength as per the new Modified Structure of Organization and Equipment (MSOE).  However, the Bn is managing the situation until it can meet the require personnel strength.

Staff Organization.     Staffs at every echelon of command are structured differently, but every staff has some commonalities. The basic model for all staff structure and organization must have an authorize document to reflect an organizational structure supportable by meaning and equipping system. 1Bn is not an exception to this. However, the Modified Structure of Organization and Equipment (MSOE) authorize two of the three basic models (Coordinating, Special and Personal) for all staff structure. The Commander (Cmdr), Executive Officer (XO) and two staff groups; Coordinating and Personal.

1Bn is one of the two Bn under the 23rd Inf Bde of the Armed Forces of Liberia (AFL) to be established and activated in 2008. Initially, the Bn was composed of a Communication, Transportation and Maintenance platoons. Upon the establishment of the Logistics Command (Logcom) in 2008, those units were transferred leaving the Bn with three line companies, one support company and an administrative company.

The Bn history is derived from a long and colorful saga of courage, daring and outstanding leadership dated as far back as the formation of the 23rd Inf Bde under the mentorship of the Pacific Architecture Engineers (PAE) in 2008. The Bn was established base on the need and framework for the operation of a full Inf Bde.  The Bn mission statement is “Quality Training Is the Best Welfare for Its Troops in Peace Time”. The Bn has the seal of the Republic of Liberia as its mascot and its original colors are yellow, blue, green, black and white.

Leadership has been a feature of humanity since societies and settlements began to be formed. The United States Air Force Officers’ Guide defines leadership as “the art of influencing and directing people to accomplish a mission in such a manner as to command their respect, confidence and cooperation”. 1Bn has been blessed with great leaders who have in the past made significant impact to the lives of soldiers, the Units and the AFL in general. Currently the Bn is been commanded by Major Korboi B Sallie, acting Battalion Commander who took over from Major Ernest Appleton. The Bn executive officer is Major James Fahnbulleh and the Bn acting Sgt Major is Archie Wilson. The chronicle of command of the Bn is listed below:

CHRONICLES OF COMMAND OF PAST AND PRESENT COMMANDERS

The Following individuals served as Commanders at the First Infantry Battalion as indicated against their names.

Training continues to play a major role in helping instill core values that provides moral framework for the Bn to meet the physical, mental and security challenges. In view of this, the Bn has been conduct meaningful and realistic training in respect to the dynamic of military threats. The training focus has been on developing officers, NCOs and enlisted soldiers by perfecting their act of soldiering through Individual Skill Training, Peacekeeping and Communication. Others are Field Training Exercise (FTX), Command Post Exercise (CPX), Small Unit Tactics, Combat Medics, Para-legal and Military Intelligence, Conventional Warfare, Regular and Irregular Warfare.

It is also rewarding to note that since the establishment of the Bn, it has continued to benefit from foreign training course offered by friendly nations and organizations. These training have impacted positively on the capacity of our officers, NCOs and enlisted soldiers. These training include: Platoon Leader Training, Company Commander Training, Junior and Senior Staff Courses, Advanced NCOs Course, Airborne and some technical and professional training/course.  In practical terms, the performances of the Bn over the years have greatly improved due to its involvement in several Internal Security Operations (ISO), Low Intensity Conflict Training, Law of Armed Conflict and Human Rights and Disaster Relief and Humanitarian Assistance Training are few to mention.

An organization certainly needs to appraise its performance and individual contributions to acknowledge their collective achievements. The Bn is not an exception to this. The Bn over the years has produced the past and current Deputy Chief of Staff, the first pilot in the AFL and the quarantine of the community of West Point during the Ebola Virus outbreak.   The operational and tactical experiences of its officers, NCOs and Enlisted in their tremendous effort and participation in the discharge of their duties have improved the AWOL and discipline records of the Bn.

Civil Military Relationship.    The Bn have established itself as the home of mutual relationship amongst the inhabitants and other Units that co- exist with her. Additionally, the relationship between the Bn and the Liberian National Police (LNP) have improved over the years and continued to be excellent and cordial.

Troops Welfare.   The Bn so far has demonstrated a good sense of direction in the troop’s day to day activities and have remain committed to it. The Bn have got to realized that as part of its responsibility, she must listen, address and dialogue the immediate problems of its troops. Having been trained to perform other tasks rather than the act of war, the leadership of the Bn over the years has found solutions to soldier’s domestic issues especially in domestic violence, neglecting of their families and homes, non-persistent support of their spouses and children, settlement of motorcycles disputes with LNP and other several human related matters.

This method of approach by the Bn has brought some significant level of understanding between the soldiers and their families, friends and LNP. On the other hand, it has boosted the morale of the troops marking them to be creditable and responsible.

Operation.     The Bn have benefited graciously from the operational experience of its troops both internal and internationally. The Bn however, has participated successfully in the following internal ops. They include:

As the first Units to be established and activated in the AFL, it’s composed five companies and staff structure that is co- located at EBK are the authorized organizational structure supported by the MSOE. The Bn history that is dated as far back as the formation of the 23rd inf bde, have achieved a significant success in the implementation of its responsibilities and duties.

Most importantly, the leadership over the years has focus in helping instill the core values, mental, physical and moral framework in perfecting their act of soldering through training and other act rather than war.  The Bn on the other hand continues to benefit from UN mission, foreign and domestic training that is positively impacting the capacities of it officers, NCOs and enlisted in the discharge of their duties.

The leadership sense of direction in the troops day to day activities have addressed and resolved some immediate problems of the troops especially in settlement of disputes with LNP, non-persistent support of their spouse and children and other related human matters. 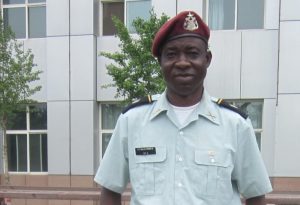 Major Sallie, Korboi Ballah was born on May 15, 1968 in Voinjama, Lofa County, Liberia. I started my primary education in Voinjama City, Lofa County.  He graduated with a High School diploma and a West African Examination Council  Certificate in 1987/1988 from the Assembly Of God High School Mission, Sinkor Old road, Monrovia, Liberia. Upon graduation, he enrolled at the University of Liberia and earned a Bachelor of Science Degree in Economics 1996/ 1997.

Upon his  graduation from the University of Liberia,  Major Sallie served as a classroom teacher at the Bishop Marwieh Institute in 1988, worked as a Revenue Agent at the Ministry of Finance in 2002, served as a Quality Control Officer for the Mohammed Groups of Companies in 2004, Reserve Officer Training Corps (ROTC) Instructor in 2005 at the Matadi Community High School and in 2007 worked as Project Officer for the United Methodist Committee on Relief.

Currently, Major Sallie is serving as Commanding Officer for the 1st Infantry Battalion, Armed Forces of Liberia. His most important job is to have total control over the staff through the battalion executive officer and the companies through the company commanders, while maintaining the final approval authority in the battalion chain of command.

Listed below are some of my areas and activities in running the 1st Infantry Battalion:

The below national and international civilian educations were obtained:

I have attended the following military courses:

The following national and international seminars attended are:

The below are the effective dates of promotion: