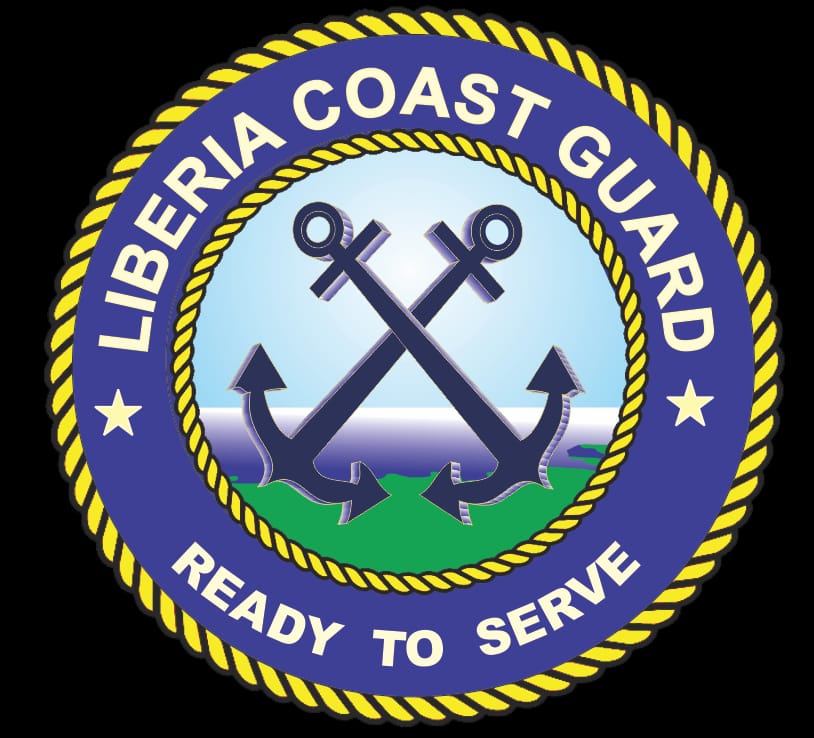 In 2007, the Liberian Ministry of National Defense requested, via U.S. Embassy Monrovia, U.S. Coast Guard (USCG) recommendations on the re-establishment of the Liberian Coast Guard (LCG). This section summarizes efforts and accomplishments to date and provides a current snapshot of the status of the LCG.

Prior to the Liberian civil wars, the LCG was a military maritime force of approximately 450 personnel charged with protecting lives and property at sea, preventing smuggling, aiding maritime navigation, and enforcing pollution standards within the country’s territorial seas. At the time, LCG patrols were conducted from the main LCG base in Freeport, Monrovia (Bushrod Island) and smaller logistics stations in Buchanan, Greenville, and Harper. All of these facilities included patrol boat moorings, refuel/refit capabilities, and modest crew accommodations.

By the late 1990s, following nearly ten years of conflict, the LCG had been reduced in size to the point that the force could no longer fulfill its missions. Shortly after the dedication of the new LCG Headquarters building on Bushrod Island, the Government of Liberia (GoL) began to lose positive control of its military bases, including the LCG Base in Monrovia.

As part of post-conflict security sector reforms, the Liberian National Defense Act of 2008 included provisions (Chapter 4 of the Act) to re-establish the LCG. Based on a Letter of Request (LOR) from the GoL dated 4 September 2007, and with concurrence from U.S. Embassy Monrovia, the United State Coast Guard (USCG) sent a technical survey and assessment team to Liberia in August 2008. The team produced a report entitled “Assessment and Recommendations for the Re-establishment of the Liberian Coast Guard” that outlined a comprehensive development plan for the LCG addressing the following elements:

The 2008 report recommended a structure for the LCG very similar to USCG Group unit. It laid out a force structure with a headquarters and logistics base in Freeport, Monrovia, and four small boat stations, each staffed for a four-section watch rotation, located in Freeport, Buchanan, Greenville, and Harper. An important planning assumption from the 2008 report stated: “The recommendations contained within this report focus primarily on preparing the LCG to develop the capacity to respond to foreign poaching, search and rescue, disaster response, and acquiring general awareness of activities occurring within 30 nautical miles of their four major seaports.” To achieve this desired end-state footprint, the 2008 report recommended starting with reconstituting the headquarters and an operating station in Freeport, then expanding south to Buchanan, Greenville, and Harper. The report cautioned, “Expansion outside Monrovia should not be undertaken until operations, training, and logistics are running efficiently in Monrovia/Freeport.” By and large, the Liberian Ministry of National Defense adopted the recommendations of the 2008 report beginning with the establishment of a fulltime Maritime Advisor position was within the Office of Security Cooperation, U.S. Embassy Monrovia via a Foreign Military Finance (FMF) case. The Liberian Coast Guard was formally re-established on Armed Forces Day, 11 February 2010 Major milestones in the reestablishment and development of the LCG include but are not limited to the following:

From an infrastructure perspective, significant work has been accomplished at the LCG base on Freeport. The base is now at final operating capability (FOC). A spacious new boat house and renovations to the old one provide ample boat storage, a modern maintenance facility, offices and classrooms. A separate barracks renovation project significantly enhanced the quality of life for crew and dependents.

The 2008 report stressed the importance of training. “The development of a capable self-sustaining maritime force requires an uninterrupted investment in training. The highly specialized nature of maritime operations results in coast guards and navies having a disproportionately high number of specialists and technicians. In the years preceding the Ebola Virus Disease (EVD) outbreak, the LCG had partnered very successfully with the U.S. Embassy Office of Security Cooperation (OSC) and the USCG to gain and fill quotas for training in the U.S. A review of the LCG training status shows that over 90% of petty officers and 60% of the entire enlisted work force have attended at least one USCG MOS/rating-type resident training course in the U.S. Many LCG personnel have also attended follow-on specialty courses in the United States. Additionally, the LCG has benefitted from multiple Mobile Training Team visits.

The LCG fleet is comprised of six primary vessels (two 27’ Defenders, two 33’ SPC-LEs, and two 24’ Boston Whalers) and a small number of inflatable boats with a very capable platforms.

Although faced with resource constraints, the LCG has achieved operational successes, most notably in fishery enforcement. The LCG is an active partner in the World Bank Group’s West Africa Regional Fisheries Program (WARFP) and has, with the assistance of fuel grants for fisheries enforcement, improved its Monitoring, Control and Surveillance (MCS) capability. This assistance has allowed the LCG to conduct effective fisheries enforcement patrols. According to WARFP data, there were an estimated 83 Illegal, Unreported, and Unregulated (IUU) fishing vessels operating in Liberian waters in 2008. In 2012, there were no sightings following a moratorium on industrial fishing announced in 2011. In 2014 only eight sightings of possible IUU vessels were reported. Critically, the GoL has been able to enforce a six mile exclusion zone from the coast, a first step which has resulted in more than a 100% increase in fish production by coastal communities. Additional statistics from WARFP indicate increased enforcement and improved licensing system have increased official GoL revenues from commercial fishing license fees from $78,600 in 2008 to $360,000 in 2015. Furthermore, the GoL recovered over $5 million in fines due to fisheries enforcement actions since the inception of the LCG.

Finally, the adverse impact of the EVD outbreak on Liberia as a whole, and the LCG specifically, cannot be overstated. From a training perspective, multiple Mobil Training Team (MTT) visits were canceled; furthermore, from an operational perspective, many routine maritime enforcement activities were curtailed as EVD response understandably took priority. However, the LCG demonstrated its utility during the crisis by conducting security/cordon patrols on the waterside of a quarantined neighborhood to limit population movement. They also provided vital port security functions, including security sweeps of piers, vessel escorts, and security patrols in support of Operation United Assistance. The LCG is a young force that has made considerable progress since its re-establishment in 2010. Investments in self-sufficiency and improved operational capability outside Monrovia are the key to long-term effectiveness of the LCG. Subsequent sections of this report specifically address the various elements detailed in the 2008 report and make recommendations for continued development of the LCG. 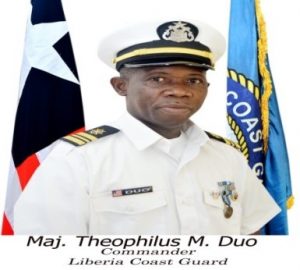 Major Theophilus Momo Duo currently serves as the Acting Commander of the Liberia Coast Guard (LCG). As Acting Commander, Major Duo oversees all coast guard operations, Training, and Administration.  Prior to his assignment, Maj Duo served as the Executive Officer at the Armed Forces Training Command (AFTC) at Camp Sandee Ware, Careysburg.  Previous appointments: Maj. Duo served as the Executive Officer at the AFTC from 2005 to 2019. Engineer Plan Officer at AFTC and headed the Doctrine and Education Section at AFTC. Maj. Duo served as Directing Staff at the Horton Academy in Freetown, Sierra Leone in 2013 where he oversaw the training of Officers of the Sierra Leonean Army, the AFL and the Gambian Army. In his career, Major Duo served in the United Nations Multidimensional Integrated Stabilization Mission (MINUSMA) in Mali in 2018.

The Acting Coast Guard Commander got enlisted in the Armed Forces of Liberia (AFL) on 9 Nov 2007 as a proud member of the 3rd batch. After successfully going through Initial Entry Training (EIT), Advanced Individual Training (AIT), and Basic Non-Commissioned Officer Course (BNOCC), Major Duo proceeded to the Officer Candidate School (OCS) and later got commissioned to the rank of Second Lieutenant in the AFL on 22 August 2008.

Maj. Duo holds a Master in International Affairs and Defense Studies (MIADS) from Nigeria Defense Academy (NDA) in 2017 and a Bachelor of Business Administration (BBA) Degree in Accounting and Economics from the African Methodist Episcopal University (AMEU) in 2002.  Before joining the AMEU, Maj. Duo earned an Associate of Art (A.A.) Degree in Computer Science from the African Methodist Episcopal Zion University (AMEZU) in 1997.  Major Duo has completed several military courses both at home and abroad. Paramount among them are: Pass Senior Course (Psc), Pass Junior Staff Course (Jsc) both from the Armed Forces Command and Staff College (AFCSC), Kaduna, Nigeria in 2017 and 2012 respectively. Engineer Basic Officer Leadership Course (EBOLC), from Fort Leonard Wood, Missouri, USA in 2011.