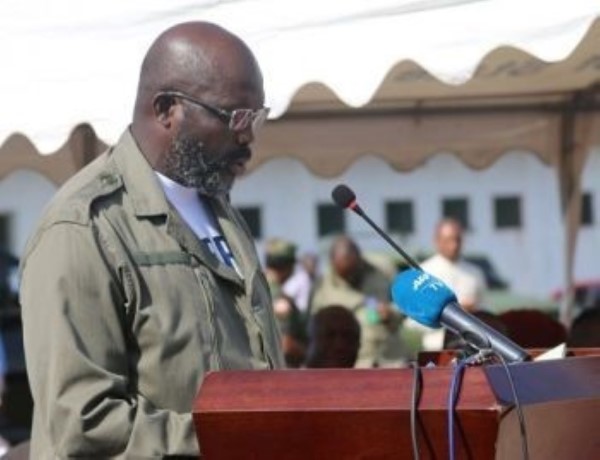 The Liberian leader expressed strong conviction that the Armed Forces of Liberia (AFL) can play a major role in uniting and building a more peaceful and prosperous Liberia, as well as make a significant contribution to regional peace and stability.

It can be recalled that on February 11, 2018, while addressing servicemen and women during the 61st Anniversary of the Armed Forces of Liberia, President Weah promised to construct a 200-bedroom Military Hospital for use by military and Para-military personnel.

President Weah reiterated his pledge and commitment to ensure the building of an army of professionally-trained soldiers, who are well paid, highly educated, comfortably housed, and medically cared for in keeping with the highest standards.

Speaking on medical care, President Weah said there are no specialized medical facilities for our men and women in arms; while our wounded soldiers returning to Liberia from peace missions abroad have to be evacuated to other countries for specialized medical treatment that they require.

He noted that too often military personnel including their families requiring medical attention have to travel outside the barracks to seek medical care in private clinics and hospitals, where they are given no priority and sometimes left to languish in private wards with no attention.

President Weah reminded the gathering that in order to address the prevailing concerns and bring the needed relief to our soldiers and security personnel, he pledged during the celebration of the 61st anniversary of the Armed Forces of Liberia to build a hospital exclusively for use by the Army and other security forces.

Doing a countdown; the Liberian leader said Monday, March 26, 2018 marked exactly six (6) weeks after he made that promise, which culminated into a gathering to break ground for the first Military Hospital to ever be built in Liberia.  Barely one-and-a-half months, his administration approved the designs and plans for the hospital and arranged the required financing, and few weeks after the historic groundbreaking, we expect the construction to get in full swing.

The new hospital to be named and styled: the: “14 Military Hospital”, will be equipped with the most modern facilities, and will be staffed by highly trained medical personnel.  It will also be a teaching hospital, to train our men and women in arms in all medical disciplines.  It is the first step towards fulfilling my commitment to build a modern and professional Liberian army.

To address potential lingering questions as to why the new hospital is called the14 Military Hospital; President Weah recalled in 1995; since a Liberian became the first – and to date – the only African to win the coveted Ballon d’Or, the highest award in soccer, the world most popular sport, no African has come close.  The recipient of the Ballon d’Or is given the title of “FIFA World Footballer of the Year.” The winner brings honor not only to his country but also his continent.  This is the first and so far the only world title that has been won by any Liberian in any sport, and it planted the Liberian flag forever in the Hall of Fame of soccer.

“I was that Liberian, and the number on my back when I played for the Lone Star at that time, was 14.  It is now attached to this important institution as a symbolic reminder of what Liberians can achieve when we put our hearts and minds together to promote and defend our country’s cause. We can be the best in the world,” he told the audience.

President Weah concluded as saying: “You will soon learn that I am a man of action and deeds, not of empty words and talk.  When I give my word, it is my bond. I do more than just talk, I act; I do more than just promise, I deliver. I have always kept my promises because a promise means everything, because once it is broken, sorry means nothing. This hospital marks the beginning of another promise kept. It is the first project of my administration, and I promise you that it will not be the last.”

The ceremony was attended by Associate Justice Philip Banks, The Speaker and Members of the Legislature, the Cabinet, Diplomatic and Consular Corps, AFL top brass and foreign military attaché.