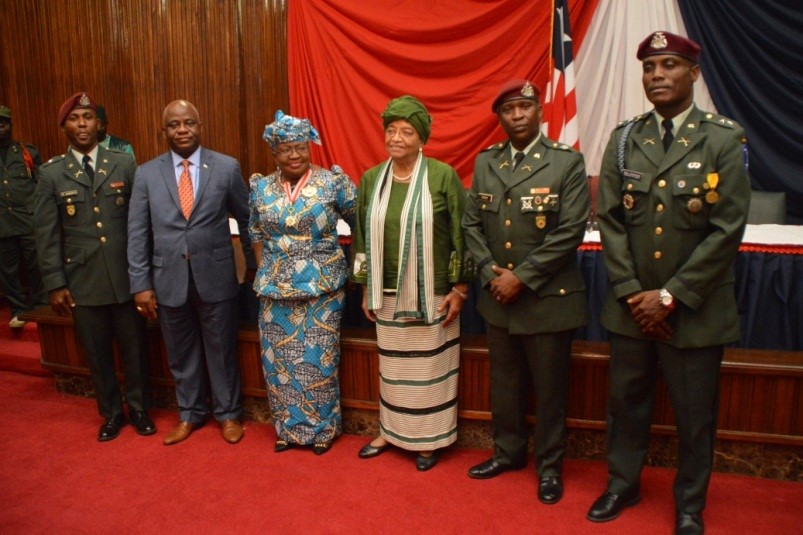 She described their performance as satisfactory since taking over from Nigerian Major General Abdurrahman who served the nation as Chief of Staff of the Armed Forces of Liberia during the restructuring process of the AFL.

The Special Commissioning and Investiture Ceremonies took place in the C. Cecil Dennis Auditorium on Friday and were presided over by President Sirleaf, the Commander-In-Chief of the Armed Forces of Liberia. She commissioned and promoted Daniel Dee Ziankahn, the Chief of Staff of the AFL, to the rank of Major/General; Prince C. Johnson, III, as Deputy Chief of Staff with the rank of Brig/General and Davidson Fayiah Forleh as Commander of the 23rd Infantry Brigade with the rank of Colonel.

President Sirleaf noted that since assuming leadership roles of the Armed Forces of Liberia, Major/General Daniel Ziankahn and his fellow Liberian officers have diligently and professionally served the nation. She commended Defense Minister, Brownie J. Samukai, Jr., for his role in professionally exercising leadership over the AFL which has led to the demonstration of loyalty, commitment and professionalism by the Liberian High Command headed by Major General Ziankahn and his colleagues.

Speaking on behalf of the newly commissioned officers of the Armed Forces of Liberia, Major General Daniel Ziankahn recalled the transfer of leadership to the Liberian officers about three years ago, when he, Brig/General Prince C. Johnson, III,  and the late Eric Dennis were commissioned by President Sirleaf cautioning them not to let the country down. He assured President Sirleaf that they remain committed to the leadership of the country and the people of Liberia and pledged to do everything possible to serve and protect the state. During the ceremony, a moment of silence was observed in remembrance of the late Major General Abduramah and the late Col. Eric Dennis.

In another development, a Special Investiture Ceremony was called for the conferral of distinction on former Nigerian Finance Minister, Dr. NgoziOkonjo-Iweala by President Sirleaf, Grand Master of the Orders of Distinction. Dr. Okonjo-Iweala was admitted into the Humane Order of African Redemption with the Grade of Dame Grand Commander.

The Ceremonies were attended by senior government officials including members of the Cabinet, Legislature, the diplomatic corps among others.