Our Heroes Return from Peacekeeping Mission 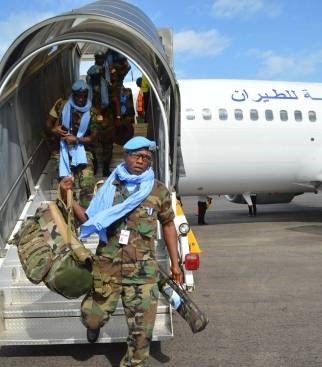 The third platoon-size of Liberia Contingent to MINUSMA that departed the country on 25 June 2015 returned on 2 September 2016 via the Roberts international Airport.

The return of the third platoon-size of Liberian peacekeepers doesn’t end AFL peacekeeping mission in Mali, but brings to an end a year of peacekeeping duty for the second platoon.

It can be recalled that on the June 23, 2013 the Government of Liberia dispatched the first  platoon-size  of AFL troops to form part of the African-led International Support Mission to Mali (AFISMA)-an Economic Community of West African States (ECOWAS) organized military mission sent to support the government of ECOWAS member nation, Mali against Islamist rebels in northern Mali.

Meanwhile, on 2 September 2016, a new Infantry Platoon, headed by Capt. Forkpah Tarnue departed Liberia for Mali. The outgoing platoon completed a three-month pre-deployment training at the Armed Forces Training Command in Careysburg. The pre-deployment training covered all aspect of tasks expected to be conducted during the tour in Mali. It covered medical screening and physical training.