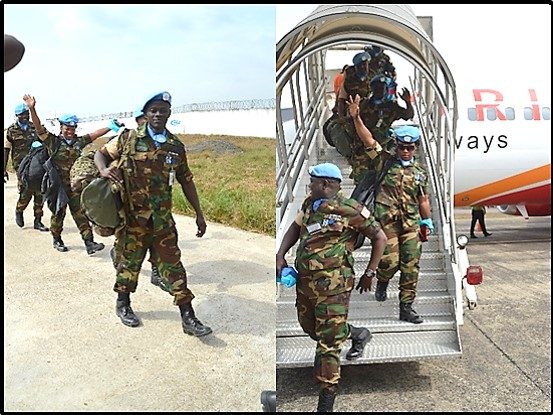 The fourth platoon-size of Liberia Contingent to the United Nations Multidimensional Integrated Stabilization Mission in Mali (MINUSMA) that departed the Country on 2 September 2016 returned to Liberia via the Roberts International Airport on 10 February 2018 after a successful mission in that West African State.

The return of the Liberian peacekeepers doesn’t end Armed Forces of Liberia (AFL) peacekeeping mission in Mali, but brings to an end a year of peacekeeping duty for the second platoon.

The Liberian Peacekeepers were met on arrival by top brass of the Armed Forces of Liberia, and family members at the international Airport.

The soldiers expressed delight in their participation in the mission in Mali and lauded families and friends for being in prayers with them while on the mission.

It can be recalled that on the June 23, 2013 the Government of Liberia dispatched the first platoon-size of AFL troops to form part of the African-led International Support Mission to Mali (AFISMA)-an Economic Community of West African States (ECOWAS) organized military mission sent to support the government of ECOWAS member nation Mali, against Islamist rebels in northern Mali.

In continuation of Liberia’s involvement in the mission in Mali a fifth infantry Platoon headed by Capt. James D. Fahnbulleh departed the country on February 12, 2018 to take up assignment.