“My mission is to Improve Troops Welfare…” – General Johnson Promises 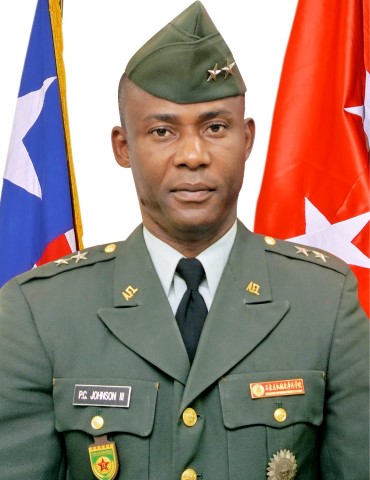 He said the improvement of the soldiers’ welfare is his top most priority as head of the Liberian army, stressing that an improved army will better contribute to the enhancement of Liberia’s growing democracy.

He said as Chief of the AFL   which is a “Force for Good”,  he will focus on driving a well- trained  disciplined and motivated force, capable of carrying out its  responsibilities in line with the Liberian Constitution and other statutes  of Liberia.

The AFL Chief assumes the leadership with renewed vigor. He was nominated by the President of the Republic of Liberia and confirmed by the Senate on February 5, 2018. Prior to his appointment, he served as Deputy Chief of Staff (DCOS), AFL, from December 1, 2016 to January 22, 2018.

For the bigger picture, the COS has outlined his vision: to build a disciplined, well-trained and professional force with improved troops welfare and enhanced operational readiness capable of defending the territorial integrity of Liberia.

In realizing this vision, the COS iterated that his mission is to improve effective leadership, to provide efficient logistic support and to improve troop’s welfare. According to him, these steps are necessary for driving a well-trained, disciplined and motivated force, capable of carrying out its constitutional responsibilities and enhancing its image as a force for good.

The COS is not new to the Armed Forces of Liberia. This is why he understands welfare issues that affect the AFL. “Addressing these issues will be a paramount concerned of my   leadership,” Gen Johnson added.