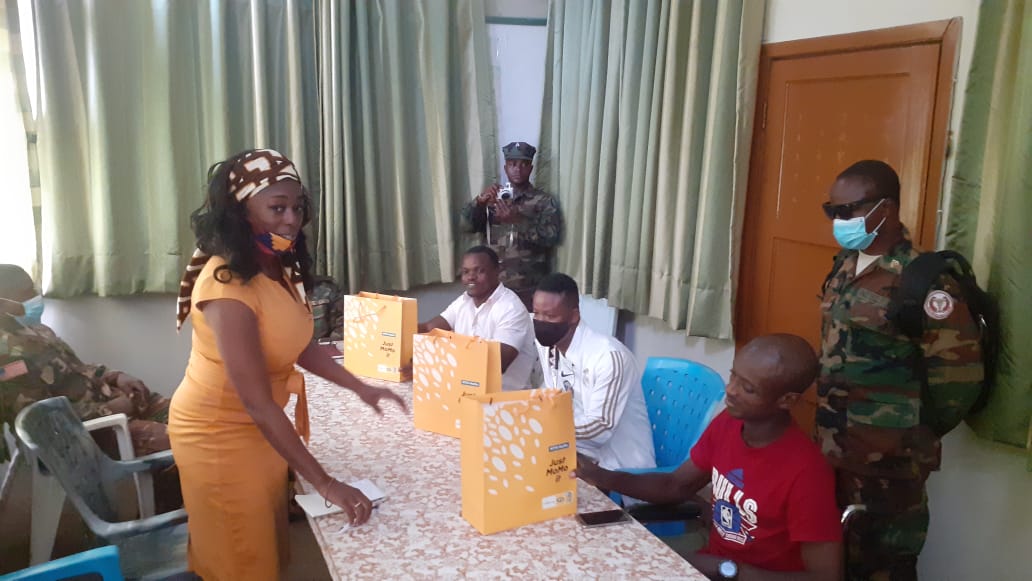 MONROVIA, Liberia —The Armed Forces Day Celebrations may be over, but the trauma of war and duty for some soldiers remain.

“Ensuring the soldiers have access to communications with their friends and family means a lot for their well-being.   It really helps,” Major Joseph Kowo, Commanding Officer, AFL Medical Command.

“Psychologically,” he noted, “Staff Sergeant Titus Jefferson, Sergeant John R. Bryant, and Sergeant George Kaffia have improved significantly from where they were to where they are now because of the ability to stay connected with family and friends.

Lonestar Cell MTN Corporate Social Responsibility Manager Lisa R. White, said, “We are happy we can brighten their lives by enabling continued connections to the people that mean the most to them.”

Five years ago, when Sergeant Bryant and Staff Sergeant Titus Jefferson completed their three-month UN peacekeeping training, they were excited to know they would travel to Mali as Peacekeepers.

The two formed a part of the Liberian contingent that would join the UN Multidimensional Integrated Stabilization Mission (MINUSMA) mandated to bring peace and stability back to the country.

Staff Sergeant Jefferson and Sergeant Bryant believed that going on a mission was a “great opportunity” to serve the people of Mali.

However, their experience in Mali challenged the knowledge gained from their training and tested the very essence of what it meant to be a soldier.

“Mali was tough.  It was a war zone,” said construction engineer Sergeant Bryant.

“I was coming from duty to have lunch on May 3, 2017,” he recalled.  “Twelve different rockets hit the camp.  I suffered a broken hand and legs. Shrapnel from the rockets penetrated my side, and some of the pieces are still in my head,” he said.

One of those rockets landed near Staff Sergeant Jefferson’s bed as he slept. Spinal injuries left this IT expert paralyzed from the waist down.

“I have to motivate myself,” he said. “I must move forward in life.” Though this 35-year-old father of four still experiences pain in his legs, he continues to look forward to a bright future with his family.

Sergeant George Kaffia received his injuries in Liberia.   As he walked back to the barracks, after completing his duty an active electrical wire electrocuted him.   Fire resulting from the electricity strike severely damaged his chest, legs, arms, and hands.

“I give God the Grace for my life,” said Sergeant Kaffia.   While he looks to God, his fiancée encourages him daily.  She is thankful she can remain connected to him during his travels to Morocco for treatment.  `

Despite their challenges, the soldiers are still willing to serve their country in any capacity.

The AFL 23rd Infantry Brigade Commanding Officer, Colonel Theophilus Dana, acknowledging their strength and fortitude said, “It takes a man to withstand all of this and still hope to serve his country.”

Indeed, they are a force for good. We are Good Together.