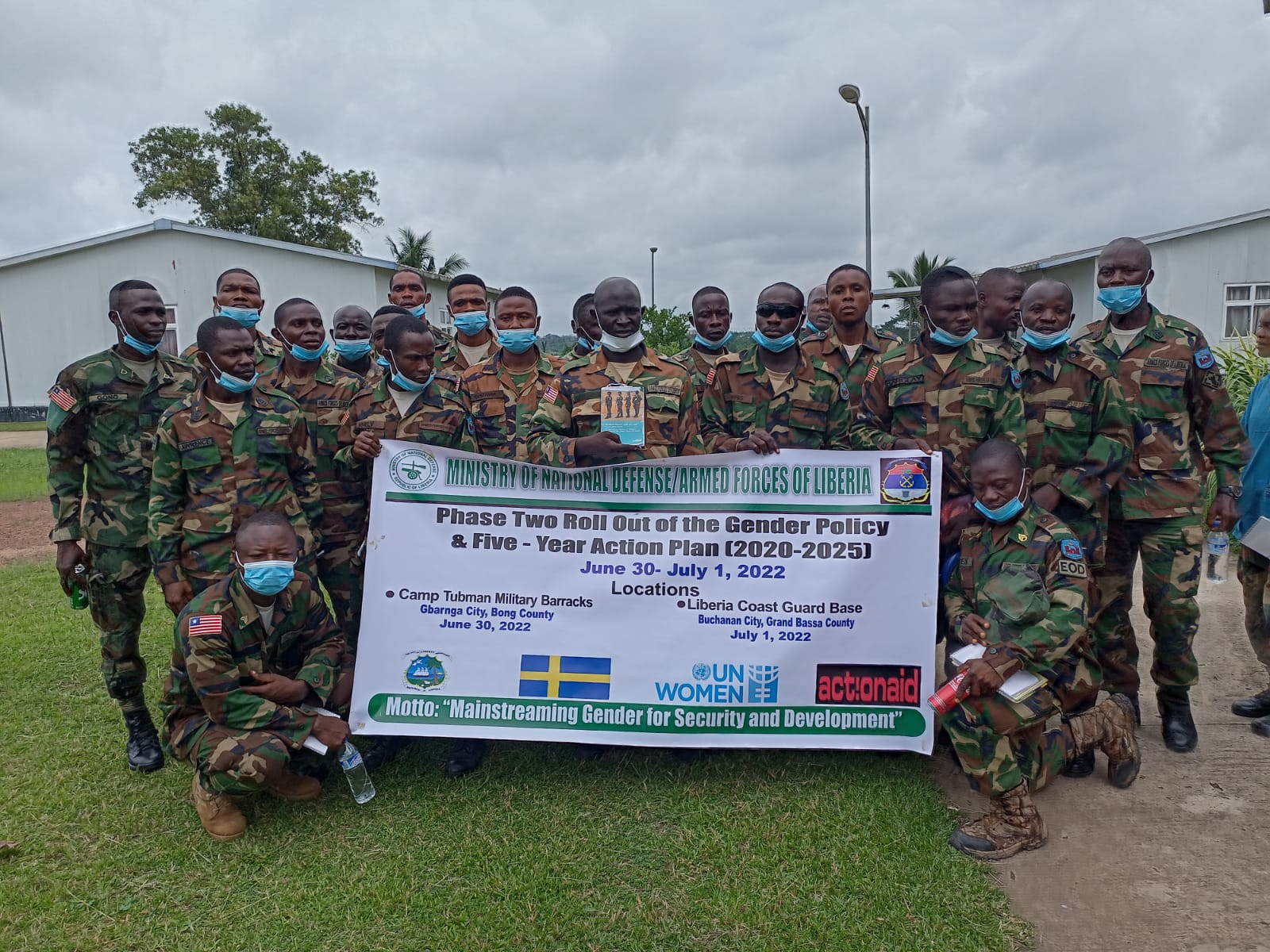 BARCLAY TRAINING CENTER, MONROVIA- 4 JULY 2022: The Department of Gender and Social Inclusion (DGSI) at the Ministry of National Defense (MOD) and Armed Forces of Liberia (AFL) has completed the first two phases (Phase I and Phase II) of its Gender Policy and Five-Year Action Plan (2020-2025) roll-out activities.

A huge number of enlisted personnel and officers from the Armed Forces of Liberia, senior officials and staff from the Ministry of National Defense, and representatives from the US Embassy, near Monrovia, participated in the roll-out exercises.

The Deputy Minister of National Defense, Honorable Tibli Olandrous Dickson, Sr., lauded the DGSI for being so instrumental in driving gender issues within Liberia’s defense sector.  The Deputy Defense Boss also thanked the partners and staff members, especially the US Defense Advisor for the valuable partnership on this journey.

“Everybody seems to be in gear with this gender issue, and because of that we will execute on our policies and plans effectively with the meager resources that we have,” he emphasized.

Honorable Dickson further promised intentional administrative actions and earnest effort in ensuring that the Government of Liberia Gender Inclusive Budgeting Process affects the Ministry of National Defense, stressing that, “We have to take local ownership for sustainable development as gender issues are development issues.”

The soldiers were very much excited about having a Gender Department that is mainstreaming gender issues within the Armed Forces of Liberia for gender equality and social inclusion, especially in addressing issues of recruitment and retention.

Most of the participants congratulated the Ministry of National Defense and the Armed Forces of Liberia for developing the gender policy and thanked partners for the support provided.

In his special remarks, Thomas Wilson, U S Defense Advisor to the MOD, expressed his excitement and pride in the significant gains the MOD and AFL are making in line with gender.

Advisor Wilson indicated that the roll-out exercise is one of the numerous milestones that the MOD and AFL have to achieve and that the US Government will always work with Liberia’s defense sector in achieving milestones.

During one of her top-notch presentations, Director of DGSI, Madam Edwina T. N. Carr, said “I am very elated that the Ministry of National Defense/ Armed Forces of Liberia is making tremendous gains in mainstreaming gender to achieve gender equality and social inclusion in Liberia’s defense sector.

Through the Government of Liberia, the staff of the DGSI and Department of Public Affairs and personnel of Headquarters AFL were very instrumental in facilitating the roll-out exercise at the various military installations and the MOD.

The gender policy aims at promoting equal rights, equal responsibilities, and equal opportunities for all staff and personnel of the MOD and AFL. The Policy advances gender equality within the institutions through gender mainstreaming. It acts as a guiding document, outlining the strategic priorities and actions for achieving gender equality and mainstreaming gender perspectives within the different policies, procedures, regulations, and operations of the MOD/ AFL.

The Policy highlights women empowerment- recruitment of more women in Liberia’s defense sector, providing the institutional culture that will be retaining personnel on their jobs, and engendering women promotion to decision-making positions.

With the availability of funding, Phase III of the MOD/ AFL Gender Policy and Five-Year Action Plan Rollout is expected to kick out at military installations in other parts of Liberia during the dry season.