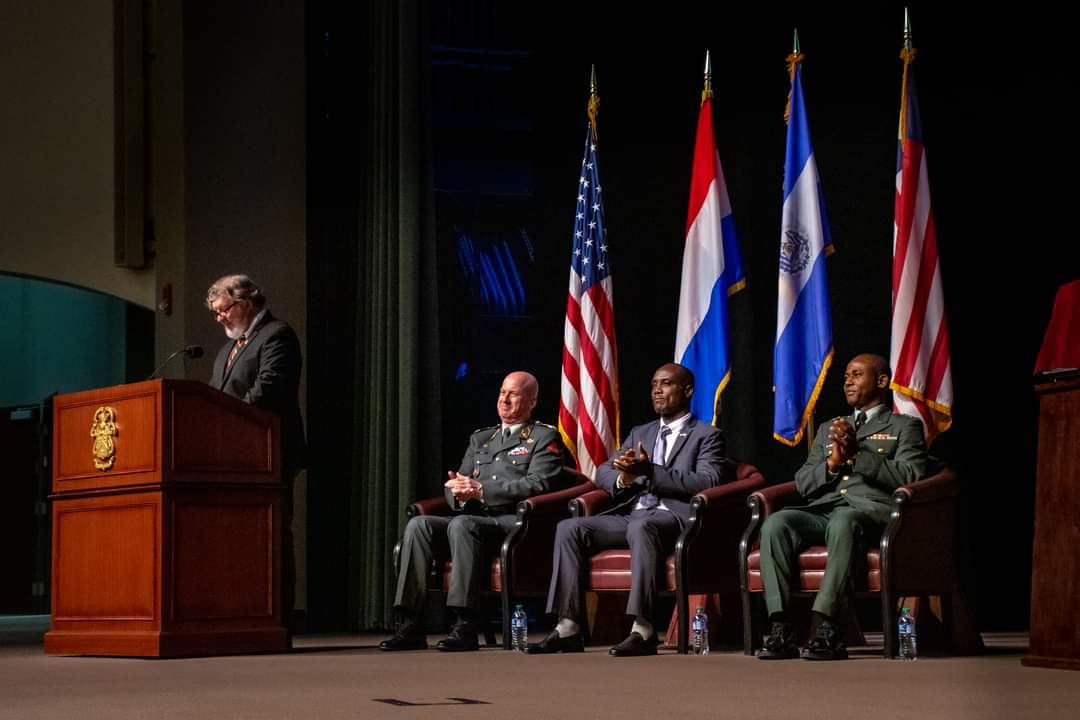 BARCLAY TRAINING CENTER, MONROVIA- 13 APRIL 2022: Maj. Gen. (Retired) Daniel Ziankahn, Minister of National Defense of Liberia, Class of 2011 and Maj. Gen. Prince Johnson, Chief of Staff, Armed Forces of Liberia, Class of 2012 were among four senior Military leaders inducted into the CGSC International Hall of Fame (IHOF) at the Lewis and Clark Center, Fort Leavenworth, Kansas, on Apr. 12, 2022. Their inductions come as a result of rising to the top military position in Liberia.

They were inducted along with Lt. Gen. Martin Wijnen, Commander of the Royal Netherlands Army, Class of 2001; and Lt. Gen. Carlos Alberto Tejada Murcia, Chief of the Joint Staff of the Salvadoran Armed Force, Class of 2005.

Mounting the podium, Liberia’s Defense Minister and former Chief of Staff of the Armed Forces of Liberia, Honorable Daniel D. Ziankahn, said “My induction is an honor which I owe to this very institution that has helped made me to be who I am today. Surely, I am proud of my CGSC pedigree. I deeply value the learning climate here. For me, the cross-cultural experiences and exposure to the American way of academic and social life will always be treasured.”

He became the Liberian Defense Minister on 22 January 2018.  From 11 February 2014- 6 February 2018, he served as Chief of Staff of the Armed Forces of Liberia. He has served in all types of appointments available in the Army– Platoon Leader, Executive Officer (XO), Brigade Commander, Military Assistant (MA) to the Minister of National Defense, Assistant Chief of Staff for Operations (ACOS J-3); The Chief of Staff, Armed Forces of Liberia and Chairman of the Committee of Chiefs of Defense Staff, ECOWAS.

Ziankahn has a BBA in Business Management from the A.M.E. Zion University College, Liberia, and Master of Military Art and Science (MMAS) from the United States Army Command and General Staff College, Fort Leavenworth, Kansas, USA. He is also a graduate of the Harvard Kennedy School of Government (Harvard University), where he acquired Executive Educations in Senior Managers in Government and Senior Leaders in National and International Security.

Reminiscing about his time at Leavenworth in 2011-2012, Ziankahn said “I will forever be grateful to the BEST MILITARY IN THE WORLD, the United States military, whose mentorship and training have rebranded the Liberian Military which has provided us the platform to develop to our full potentials to contribute in a most meaningful way to the post war development of Liberia”.

“What an honor to be considered for induction into the US Army Command and General Staff College International Hall of Fame, Leavenworth Kansas,” Major General Prince Charles Johnson, III, emphasized while iterating the commitment of the Armed forces of Liberia in working with other militaries in the sub region to combat the growing wave of terrorism, maritime crimes and coups.

Maj/ Gen Johnson III holds a Master of Arts Degree in Peace Studies (MAPS) from the Kofi Annan Institute for Conflict Transformation (KAICT), University of Liberia; Post Graduate Certificate in Public Sector Management from the Institute for Public Administration and Management (IPAM) – University of Sierra Leone, Freetown; a Bachelor of Business Administration (BBA) degree in Accounting from the United Methodist University. Also, he has completed the Harvard Kennedy School Executive Education for Senior Executives in National and International Security, Harvard University, and both African Center for Strategic Studies (ACSS) Seminars in Senior Military leadership and managing Security Resources in Africa, all in the USA. He is married with two sons.

“It is an honor and a reminder to us all that the future holds a lot for us all if we prepared and work diligently,” Maj/Gen. Johnson told his audience.

Liberia’s defense sector under the Pro-Poor Agenda for Prosperity and Development (PAPD) is making headway internationally for its professional services to the people of Liberia. This is happening under the command and control of Major General Daniel D. Ziankahn, Jr. (Rtd.), Minister of National Defense, and Major General Prince C Johnson, III, Chief of Staff of the Armed Forces of Liberia.

The United States Army’s latest move to include its Liberia counterpart as part of this prestigious ceremony is welcoming.

The CGSC International Hall of Fame was established by the college, the Greater Kansas City Chapter of the Military Order of the World Wars and the CGSC Foundation in 1973. To be considered for the International Hall of Fame an officer must be a graduate of CGSC and have attained, by merit, the position of leader of his or her country’s army or defense forces. In addition to being inducted into the Hall of Fame, inductees are presented a CGSC certificate of honor by the Military Order of the World Wars and a Life Constituent Certificate by the Foundation.

Officers from 73 countries have been inducted into the hall. Fifteen International Hall of Fame members have gone on to be heads of state or heads of government in their countries.

International military student participation in cooperative military studies in the United States originated at Fort Leavenworth with the arrival of Swiss Lieutenant Henri Le Comte in 1894. Since then, international students, representing 165 countries, have become an integral part of the Fort Leavenworth experience. These talented military officers contribute to a rich professional and cultural exchange environment.