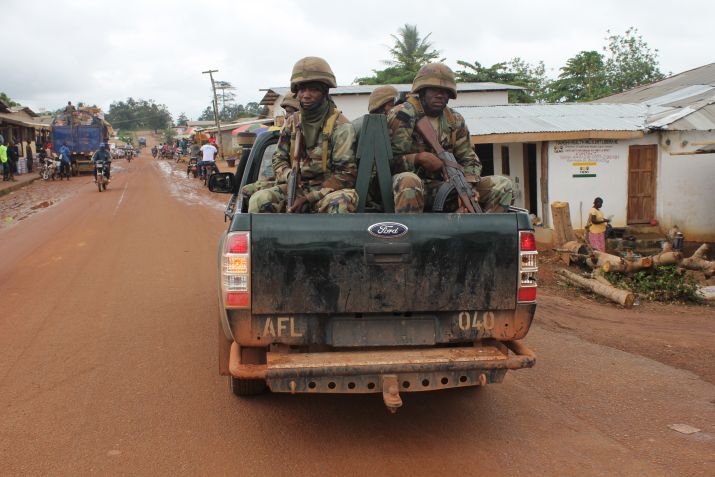 The Activation Ceremony for the first three companies; Alpha, Bravo and Charlie, constituting the First Battalion of the 23rd Infantry Brigade of the Restructured Armed Forces of Liberia was held on Wednesday, December 19,2007 at the Barclay Training Center (BTC) in Monrovia.

According to military history, the Activation Ceremony is an old military tradition. It serves two key purposes according to the proponent of the tradition. First, it allows the commander the opportunity to assess the readiness and discipline of the unit and second, with the uncasing of the guideon it marks a definite point in time to commemorate the beginning or continuation of a unit’s history and lineage by carrying on the finest tradition of the Armed Forces of Liberia.

The uncasing of a unit’s guideon further signifies the beginning of a chapter in the life of a military unit. During the activation ceremony, the First Sergeant of each unit presented the unit’s guideon to the Commanding-Officer-In Charge of the Armed Forces of Liberia (AFL), M/Gen Suraj A. Abdurrahman who in turn presented the guideon of each unit to the unit’s commander signifying the charging of his unit effective 19 December 2007.

In further manifestation of the trust and responsibility of the company’s enlisted members, the commander of the unit passed the unit’s guideon to the First Sergeant who serves as the interim custodian of the guideon. Defense Minister Brownie J. Samukai ,Jr. has reiterated the commitment of the authorities of the Ministry of National Defense and the Armed Forces of Liberia that ethnic dominance has absolutely no place in the new Armed Forces of Liberia, adding,” All tribes and people will be represented in this new Armed Forces.”

Minister Samukai made the statement at the activation ceremony of the first three companies of the First Battalion of the 23rd Infantry Brigade of the restructured Armed Forces of Liberia. In the words of Minister Samukai, “We will ensure that the new Armed Forces of Liberia become an inbuilt part of the reconstruction of Liberia”
The Minister further said that the new AFL shall remain loyal to the Liberian constitution and to the Liberian People. According to Minister Samukai, the Commander-in Chief of the AFL Her Excellency Madam Ellen Johnson-Sirleaf has already mandated that consideration be given to the Engineering Company of the new AFL so that the company may have a role to play in the reconstruction of Liberia.

Also speaking at the activation ceremony was the Command Officer In-Charge (COIC) of the Armed Forces of Liberia, Maj/General Abdurrahman. He reminded the activated units of the core army values of loyalty, duty respect, honor, selfless sacrifice, integrity and personal courage. He said those are the attributes that put the profession of soldering above all other professionals.

He again said he is confident that the Armed Forces of Liberia will continue to be the leading profession in the rebuilding of Liberia. The United States Ambassador Donald Booth who also spoke at the activation ceremony warned the units’ commanders to exemplify characteristics aimed at boosting the reputation of their units.

In his words, “The important thing now is to make sure that you bring respect to your units and to your homes.” The US AFRICOM Deputy Commander for Military Operations, Navy Vice Admiral Robert T. Moeller graced the activation ceremony.

According to Vice Admiral Moeller, the establishment of the infantry companies by the Liberian Ministry of Defense is an important step in the development of a professional, a-political military for Liberia.

Moeller noted that the activation of the first formal units in the Armed Forces of Liberia was the result of what he described as “outstanding partnership that the U.S. and Liberia enjoy together-a partnership that demonstrates the commitment of both nations to security cooperation and assistance in Africa.”