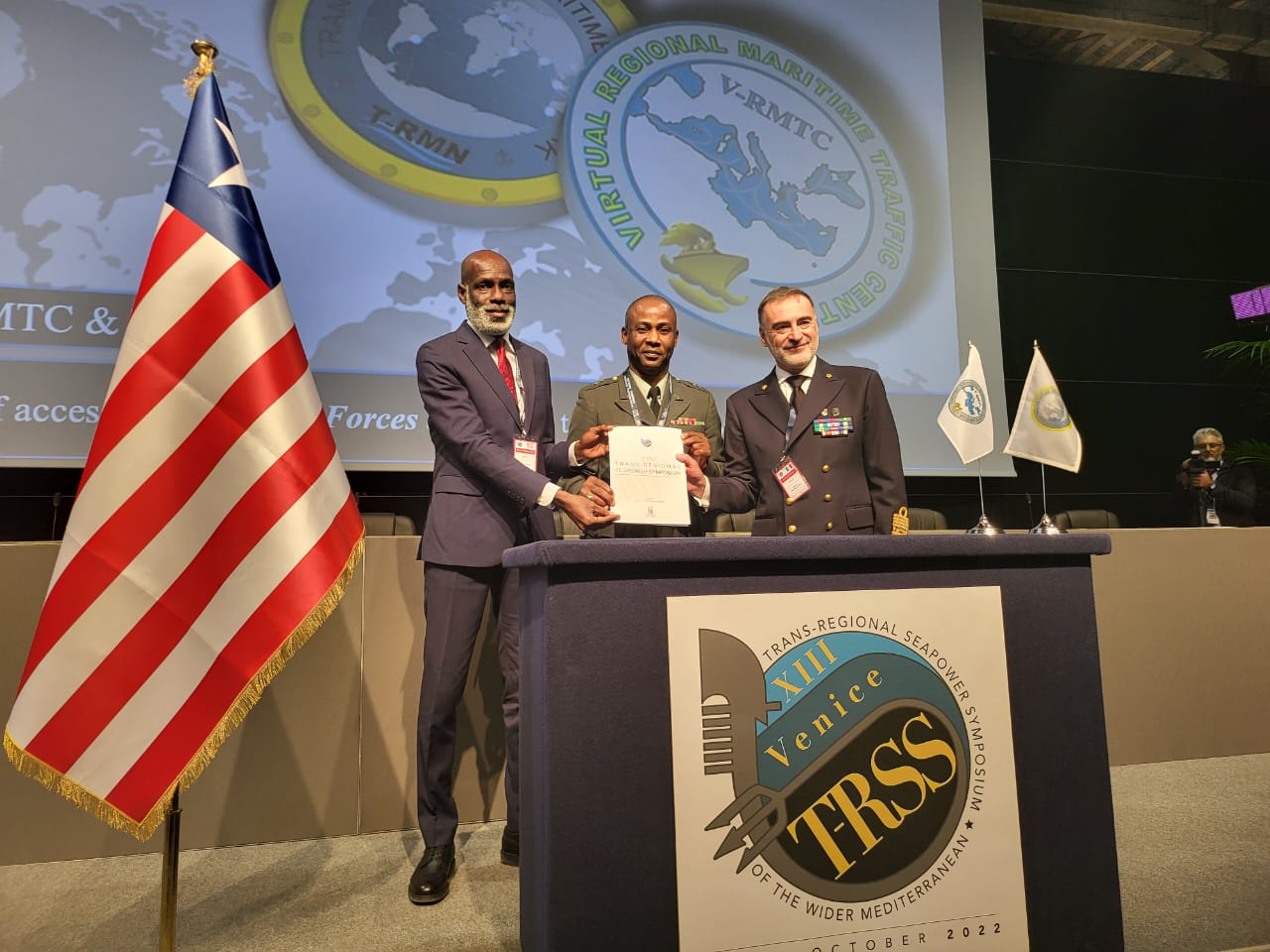 (Venice, Italy – October 7, 2022) Liberia, through the Armed Forces of Liberia, has become the newest member of the multinational Trans-Regional Maritime Network (T-RMN).

The Accession Agreement was signed between AFL Chief of Staff General Prince Charles Johnson and the Chief of Staff of the Italian Navy Admiral Enrico Credendino and witnessed by Maritime Commissioner, Lenn Eugene Nagbe, in Venice, Italy, on the margins of the 13th edition of the Trans-Regional Seapower Symposium.

Liberia also becomes a member of Trans Regional Maritime Virtual Regional Maritime Traffic Center (V-RMN) after a unanimous consensus gathered by the Italian Navy as a technical leading Navy of countries that show significant commitment to broadening the overall Maritime Situational Awareness and strengthening the bonds of collective cooperation globally.

This was a result of the AFL’s commitment through the Liberia Coast Guard (LCG) to enforce maritime security in the Liberia waters and to partake in national, regional, and global maritime security conferences, seminars, workshops, symposiums, and exercises as it relates to protecting the Gulf of Guinea (GoG).

Today’s Note of Accession signified, that the Liberia Coast Guard (LCG) and the Liberia Maritime Authority will enhance their ability to monitor the country’s vast territorial waters and boost maritime security as well as to improve the situation awareness of the maritime domain and merchant traffic in the Gulf of Guinea and globally.

On behalf of the Armed Forces of Liberia, the Liberia Coast Guard and the Liberia Maritime Authority, General Johnson commended the Italian Navy for its leadership in providing the proper mechanism to address some of the challenges the world is facing.

He stressed the need for multilateral agreements and cooperation which are necessary due to the large traffic in the ocean that a single nation cannot monitor.

“Through Partnership, we can mitigate challenges” General Johnson.

For his part, Commissioner Nagbe said “Liberia’s participation will greatly enhance maritime security in its territorial waters and the Gulf of Guinea which is currently plagued by piracy and other transnational crime. Criminal activities in the Gulf of Guinea pose a significant threat to lives and global trade. This global program will go a long way to curtail the threat”.

Also speaking after the signing, Admiral Credendino said Liberia is an important and critical addition due to its strategic location, and its position as a major flag and port state. “By joining T-RMN, Liberia has completed a key part of the link”, he said. The T-RMN collaboration, which brings together 38 maritime countries including Italy, Australia, France, United States, United Kingdom, Senegal, Spain, and Germany among others, is an operational network that uses modern technology and naval assets to mitigate threats to maritime safety around the world.