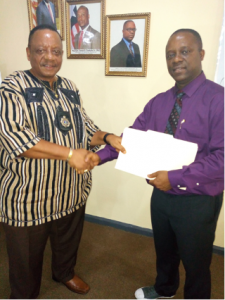 Barclay Training Center, Monrovia- April 4, 2018: The Liberia Coast Guard (LCG) has accepted to train forty (40) Immigration Border Patrol Marine Units Officers of the Liberia Immigration Service (LIS) in the operation of Rigid Hull Inflatable Boats (RHIB), beginning from May 1, 2018 to May 19, 2018 at the Liberian Coast Guard Base.

It can be recalled that the LIS received a donation of six (6) Rigid Hull Inflatable Boats to build its operational capacity. The LIS, being desirous of training its designated personnel for the use of these boats, requested the Liberia Coast Guard to assist in conducting said training.

According to the MOU, the LCG will offer the forty designated LIS officers two courses: Small Boat Operations and Outboard Motor Maintenance for the period of eighteen days.

The LCG will also provide protective equipment, instructors, classroom, training labs, training materials and PPE, transport and storage of fuel for the Outboard Motors and lodging for the forty (40) course attendees at no cost.

In consideration of the services that the LCG will provide, the LIS shall pay the amount of Thirty Two Thousand Five Hundred United States (US$32,500.00) dollars through the Project Implementation Unit (PIU) of the United Nations Mission in Liberia to the Liberia Coast Guard/ Ministry of National Defense for the implementation of the training prior to the commencement of the training on may 1, 2018.

During the signing ceremony, the Deputy Minister for Administration, Hon. Tibli O. Dickson, assured the Commissioner General of the Liberia Immigration Service, Cllr. Lemuel E. A. Reeves, Sr., that the training will be conducted with accepted international safety norms.

For his Part, Cllr. Lemuel E. A. Reeves, Sr., said that the training will afford the LIS officers additional knowledge to perform the mandate of the LIS which includes the control of immigration, emigration and patrol of the Liberian borders to interdict illegal entry, human trafficking and the entry of illegal arms and weapon of mass destruction.