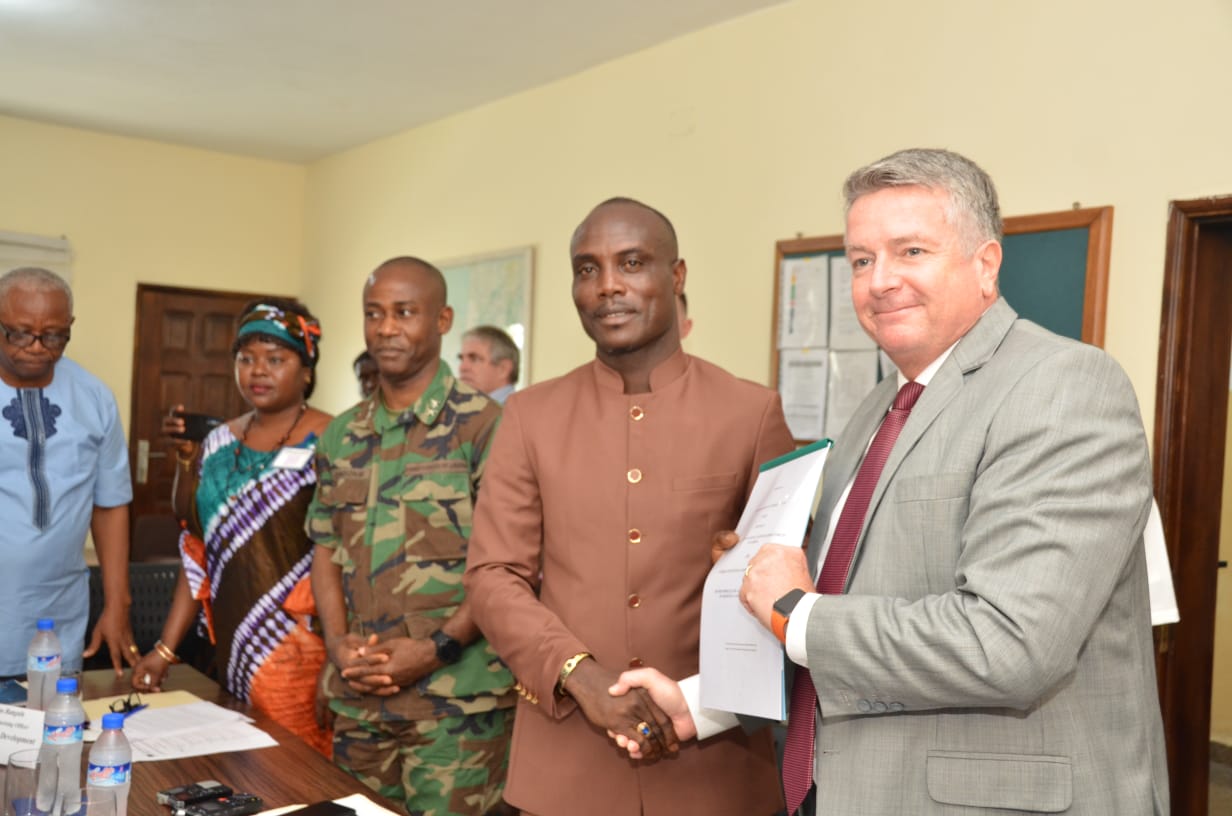 The Delegation of the European Union to Liberia hosted the signing ceremony of the Memorandum of Understanding (MoU) between the Government of Liberia and the Camoes- Portuguese Institute for Cooperation and Language I.P. in the context of the EU-funded regional program with the Economic Community of West African States (ECOWAS) in support to West Africa Integrated Maritime Security (SWAIMS).

The Memorandum of Understanding now signed sets out the partners’ responsibilities for the delivery and use of the 2 semi-rigid boats and the forensic equipment, as well as the training of trainers and support for the training of the garrisons.

The signing of this facilitative MoU between the Liberia Minister of National Defense, Major General Daniel D. Ziankahn (Retired), and the President of the Camoes I.P., Ambassador Joao Ribeiro de Almeida, took place at the offices of the Delegation of the European Union in the Liberian capital via videoconference from the headquarters of Camões I.P., Lisbon, on Monday, 27 June at 3 pm GMT. Liberia is the first ECOWAS member state to sign the facilitative MoU.

Speaking during the virtual signing ceremony, Atty. Martus Bangalu, Deputy National Authorizing Officer, Ministry of Finance and Development Planning (MFDP), Liberia, said that “We are delighted to be selected as a part of nations benefiting from the EU financial support of 28 million Euros for SWAIMS’ project which aims at improving maritime security and safety as well as strengthening the legal, governance and law-enforcement frameworks to better support maritime security across the region. She spoke on behalf of Liberia’s National Authorizing Officer, MFDP, Honorable Samuel D. Tweh.

“There have been numerous instances of illegal activities in the Gulf of Guinea, and the provision of these inflatable boats, serving as a combat multiplier, will add to our own capabilities to address these illegal activities,” said Major General Daniel Ziankahn, Jr, (Retired).

Liberia’s Defense Minister also stated, “We are going to honor our side of the MoU by providing operational security for our counterpart that will carry out the Training of Trainers program and ensure through the MFDP that the maintenance of the equipment and boats is very paramount, addressing long-term liabilities.

Speaking on behalf of ECOWAS, Ms. Irene Wallace of ECOWAS, Liberia Office, said, “The Liberian authorities acknowledge and are pleased with the commitment demonstrated by the ECOWAS Commission and the European Union to the improvement of national maritime security through the SWAIMS’ project.”

For the past four years, ECOWAS has been working towards strengthening the maritime security of its member states through the EU -funded Support for West African Integrated Maritime Security (SWAIMS) program.

With a budget of 28 million EURO (close to 30 million USD), SWAIMS is the largest initiative on maritime security in the ECOWAS region. The program provides material support to the 12 ECOWAS coastal member states, as well as training and legal strengthening to all 15 ECOWAS member states (including the three landlocked countries) plus Mauritania.

Under the largest SWAIMS component, implemented by the Camoes I.P., the capacities of the Liberian Coast Guard and related entities, to carry out patrolling and evidence collection at sea, will be strengthened with the supply of rigid-hull inflatable boats (RHIBS) and relevant training of its personnel.