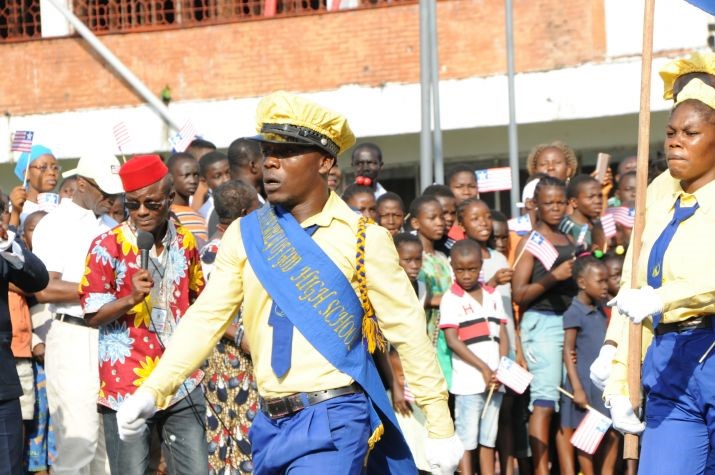 Monrovia, Liberia: Students from all over Monrovia assembled on Ashmun Street, opposite the Centennial Pavilion in central Monrovia, on August 24, 2017 to begin the celebration of this year’s National Flag Day.

Each year, August 24, the National Flag Day which is one of the public holidays in Liberia, is celebrated with students moving majestically and showcasing their talents- making show that they are recognize by the huge on-looking crowds.

At this year’s program, the students, many whom who gave their eyes rights, rightly amused the President and her cabinet ministers as thunderous applause overwhelmed the occasion to the extent that President Ellen Johnson Sirleaf herself puts up a glaring smile in appreciation of the students’ performances.

A 9-year old girl of the Permilia School thrilled the President as she majestically gave her eyes rights with another round of applause from the bystanders.

During the indoor program held in the hall of the Centennial Pavilion, an 11th grade student from the G. W. Gibson read the proclamation on behalf of the Liberian leader, President Ellen Johnson Sirleaf.

At this historic event, President Ellen Johnson Sirleaf urged Liberians to give thanks to God for the many achievements the country has experienced over the years in spite of the many difficult periods the country has been through. She stressed that peace and development continue to reign in the county. The Liberian leader credited the country’s achievements to the resilience and hard work of the forefathers, chiefs, elders and patriotic citizens among others who made sacrifices for the maintenance of the land.

“Let’s just celebrate all that we have; all that God has been good to give us, all that we have done ourselves to be where we are; the peace we enjoyed, the development that begins to reach to out to us, though much more needed, when we leave today, be thankful that because all those founding fathers, chiefs and elders and all the patriots from all sides of our land have made great sacrifices that today, despite all the turbulence and disruption in peace we can still stand firm as a nation and we can say we are ready to claim the future and see Liberia rise” President Sirleaf noted.

She noted due to the priceless contributions and sacrifices of the founding fathers and many others, Liberians can once again claim the future. She therefore called on all Liberians to reflect of the message of the orator stressing that the flag is the pride of Liberia because of what its represents.

She said the red represents the blood that have being shed over the years and even currently to maintain the sovereignty as a nation; the blue, represents the continent, which according to her, which blends the people of Liberia; the history and the newcomers coming together to a continent rich in resources, struggling for survival, emancipation and development; while the white symbolizes the pure in spirit of a people reunited, reintegrated standing along to be the one star – the one independent nation on the continent, something she said Liberians are proud off.

Earlier, the Orator of the 170th National Flag Day and Chairperson of the Isaac A. David School Madam Christian Tolbert Norman, speaking on the topic:  “Patriotism the Way for National Transformation”, called on Liberians to be more patriotic and committed to the growth and development efforts of the nation but disagreed with the redesigning of the Liberian flag as being recommended by others.

She noted that instead of Liberians clamoring for the change of the Liberian Flag, they should rather change their attitudes and ways of life if the country should move forward in it development agenda.

Madam Norman noted despite the huge gains the country has made during the period of recovery and reconstruction (2003 – 2012), there are still very serious issues that need to be analyzed and addressed with political will. She intimated the venerability of youth and young adults.

She maintained that until these issues are adequately addressed with determination and strategic planning, the 2030 vision for national transformation will not be achieved. She used the occasion to commend the Ministry of Education for the opportunity to serve as orator for 2017 National Flag Day.