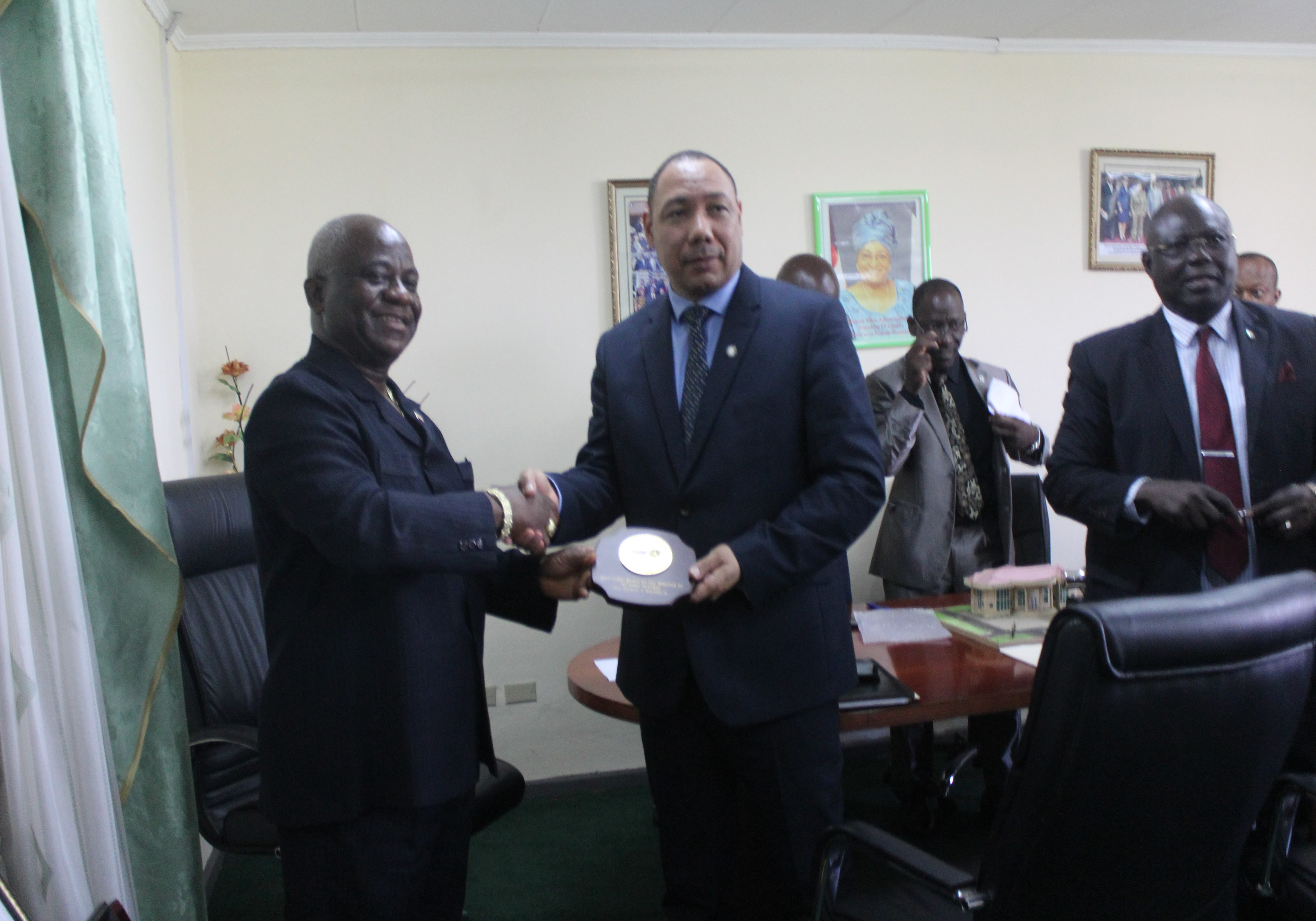 Barclay Training Center, Monrovia: Liberia’s Defense Minister, Honorable Brownie J. Samukai, Jr., has expressed appreciation to the ECOWAS Commission for its continuous engagement with Liberia’s Ministry of National Defense. Minister Samukai anticipates that democratic governance can gain traction in the West African sub-region for economic boom for the betterment of our common peoples.

The Defense boss acknowledged the historical role ECOWAS has played over the years with regards to impacting the development of the Liberian Defense Sector. The Minister thanked the ECOWAS Commission for the support to regional partners who are contributing to the professionalism of the Armed Forces of Liberia through the ECOWAS Advisory and Training Team. Minister Samukai further thanked the visiting ECOWAS delegation for the slot given to Liberia to serve within the ECOWAS Training Department in Abuja, Nigeria.

Minister Samukai made these assertions when the Vice President of the ECOWAS Commission, Dr. Edward David Singhatey, accompanied by Ambassador Tunde O. Ajisomo, Special Representative of the President of ECOWAS Commission in Liberia; Sampson Eyekosi, Program Officer –Strategic Movement; and Isaias Barreto da Rosa,  Commissioner, in charge of Telecommunication & Information Technologies, paid a courtesy call on him at his Barclay Training Center office on the United Nations Drive in Monrovia, on 28 August 2017.

The purpose of the visit was in furtherance of ECOWAS’ commitment to Liberia, specifically to strengthen cooperation with Liberia’s Ministry of National Defense.

Speaking during the visit, Dr. Singhatey, as head of the delegation, praised Minister Samukai and the members of the Liberian Defense Sector for the professional management of the Defense Sector over the years. He further thanked the Ministry of Defense and Armed Forces of Liberia for the preparedness and readiness to host the upcoming Chiefs of Defense Staff (CDS) meeting in Monrovia, from 6-8 September 2017.

Touching on the upcoming elections in Liberia, Dr. Singhatey further assured Minister Samuakai of ECOWAS’ preparedness to send long-term and short-term observers to engage the Government of Liberia and all political parties with the aim of conducting free and peaceful elections. Earlier, Dr. Singhatey, on behalf of the ECOWAS Commission, expressed his condolence for the lost of Colonel Solomon Gonny who served the ECOWAS and Cpl. Ousman Sheriff, who lost his life in Mali.

The Vice President intimated that by March 2018, the United Nations Mission in Liberia (UNMIL) will leave and the authorities of ECOWAS are in ongoing dialogues for taking over UNMIL residual assets in Liberia. When this effort is realized according to the visiting team, it will strengthen the ECOWAS Standby Force for the promotion of peace and security in the sub-region.