Defense Minister and Others Receive Honors. 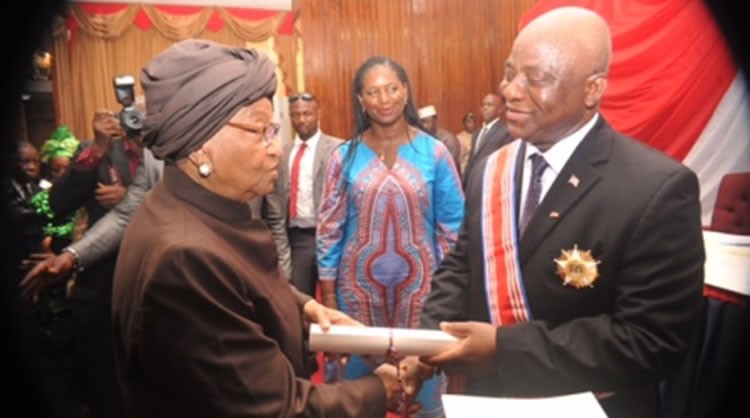 President Ellen Johnson-Sirleaf has honored two prominent sons of Liberia for their distinguished and dedicated services to the state and society. She also honored the Late Internal Affairs Minister, Ambulai B. Johnson, for his dedicated services while alive.

President Sirleaf yesterday honored and bestowed on Defense Minister Brownie J. Samukai one of Liberia’s highest honors, Knight Great Band, and admitted him into the Humane Order of African Redemption (KGB-HOAR). He was honored as a distinguished statesman and dedicated public servant.

President Sirleaf also honored the University of Liberia President, Dr. Emmett Dennis for his distinguished and dedicated services to the state-run university. He was named Liberia’s distinguished Scientist and dedicated public servant. Dr. Dennis was also given one of Liberia’s highest honors, Knight Grand Commander, and admitted into the Humane Order of African Redemption (KGC-HOAR).

The Late former Internal Affairs Minister Ambulai B. Johnson was among the honorees for his years of service to his country. He was honored and named Economic and distinguished public servant. One of Liberia’s highest honors was received on his behalf by a representative. He was given the title, Knight Grand Commander and admitted into the Most Venerable Order of the Pioneers (KGC-MVOP).

The three personalities were honored at a colorful Investiture ceremonies hosted by Madam Ellen Johnson-Sirleaf, President of Liberia and Grand Master of the Order of Distinction. The ceremonies which brought together an array of government officials, relatives and friends of the honorees, was held yesterday at the Ministry of Foreign Affairs.

In brief remarks, President Sirleaf said Investiture ceremonies are held mostly during Liberia’s Independence Day, but this was a special program to honor Mr. Samukai who could not be recognized at the February 11, 2017 Armed Forces Day program due to other engagements. “We decided to do this to give honor to our friends who have served with distinction over the years,” President Sirleaf said.

The Liberian leader said Dr. Emmett has completed his seven years tenure as President of the University of Liberia and as such, it was befitting to honor him at this time for his distinguished role played in transforming the state-run university.

“Samukai is our long-serving minister; he and Dr. Dennis have done so well for this country and they have made the difference; we hope that their works will inspire others to serve their nation”, President Sirleaf said.

Brownie J. Samukai is a National Security expert who has served in the security sector for the past 39 years. Mr. Samukai has distinguished himself as a team player with an outstanding leadership skill. The Liberian Defense Minister was praised for his commitment and loyalty. Under his leadership as Minister of National Defense, Mr. Samukai has built a professional armed force. The Liberian Army is on its 1st international peace operation in Mali after 50 years.

Dr. Dennis took over the UL in the midst of mounting challenges including the frequent disruption of classes and other vices. As President of the UL, Dr. Dennis focused on academic integrity. Several faculty members were trained abroad while the enrollment of students increased during his administration.