Defense Family Honors US Under Secretary 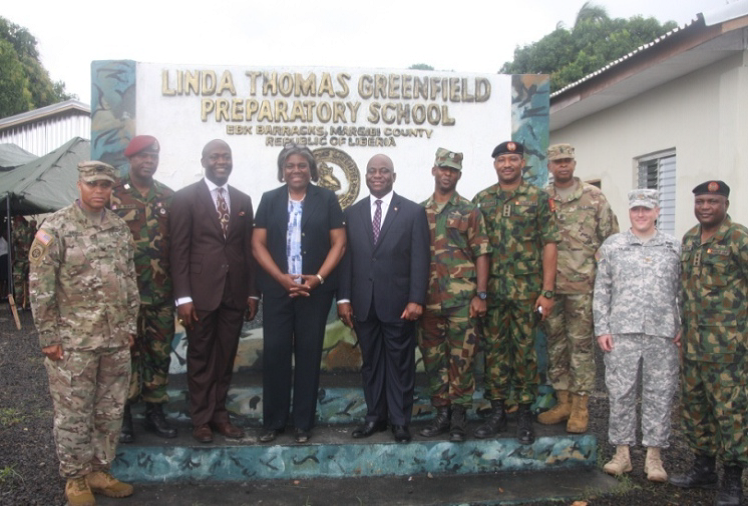 EBK Military Barracks, Margibi County- US Under Secretary of State for African Affairs, Ambassador Linda Thomas Greenfield says she feels speechless to be at the Edward Beyan Kessely (EBK) Military Barracks not because of the honor bestowed upon her by the Ministry of National Defense’ Family, but because of the incremental growth in the population of students at the Linda Thomas Greenfield Preparatory School from 35 to over 1000 students.

Assistant Secretary Greenfield recalled that many years back, she worked along with the late Major General Suraj A. Abdurrahman to ensure that the military is what it is today. The growth of what is today called the Linda Thomas Greenfield Preparatory School is attributed to the hard work of the late General. She called for the observance of a moment of silence in memory of the fallen General.

She expressed confidence in the young students saying, “One day I may meet you either as ministers or officers because you are the next generation of Liberian leaders.” She therefore, cautioned the students to take their learning seriously, adding, “Take and read every book you find because it was due to the lack of education that your country went through the difficulties of war.” Madam Greenfield thanked the administration and staff members for the upkeep of the School. She presented an assortment of educational materials including, chalks, erasers, pencils, etc., to the institution and for the use of the students. Madam Greenfield informed the students, faculty and Defense Family that the Bethany High School in the State of Louisiana was interested in establishing a sisterly relation with a school in Africa. Madam Greenfield noted, “This is an opportunity for the Linda Thomas Greenfield Preparatory School here at EBK to benefit from this school in whatever little way,
adding, I saw you as babies now you have grown.”

Earlier, Defense Minister Brownie J. Samukai, Jr., presented a citation, which had been signed and approved by the Liberian President, H.E. Madam Ellen Johnson Sirleaf, to Madam Linda Thomas Greenfield. The citation reflected the change of the school’s name from the Brigade Preparatory School to the Linda Thomas Greenfield Preparatory School. In the words of the Honorable Defense Minister, “This citation is presented to you in order to ensure that your legacy in Liberia over the years lingers

on.” The Minister expressed his desire to work with the AFL High Command to extend the capacity of the school at an incremental level to accommodate the grade levels of the students and to make the institution a better one. He also promised to ensure the introduction of computer literacy program at the school in order to have the students catch up with other students in this age of technology.
rd In a related development, the Commander of the 23 Infantry Brigade at the time, Colonel Prince C. Johnson, III, presented a plaque to Madam Greenfield on behalf of the AFL. In his words, ‘” I am honored to stand here today to say thank you for the support your country continues to render our country. 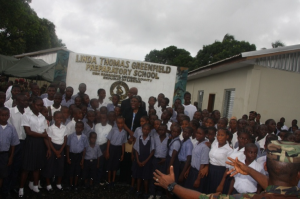 In the military, it is said that welfare and mission go hand-in –hand but as for us in the AFL, welfare is secondary to mission.” Col Johnson expressed thanks to all those who contributed to the improvement of the institution noting, “As we educate our kids in this country, we will never go back to the odds of the past.” The Parent-Teacher- Association, through a female instructor, Josephine Kordee presented an African attire to madam Greenfield as their way of appreciation for her contributions to the
development of the school.