Gbarnga, Bong County-The People’s Republic of China(PRC) remains one of the reliable partners when it comes to the Ministry of National Defense’ quest to professionalize the Armed Forces of Liberia (AFL) as a ‘force for good’. China, like all the other partners that continue to support the AFL, has since 2008 provided training opportunities for both civilians and military personnel of the Liberian Defense Sector annually.

Civilians and uniformed personnel have benefited from these training opportunities provided by the Chinese in various academic and military institutions. Additionally, China continues to provide equipment and logistical supports to the AFL; key amongst those supports was the donation of an assortment of engineering equipment in 2012 worth about 5M United States Dollars.

The Chinese provided hands-on training for AFL’s Engineers on how to operate the different pieces of equipment. The training was conducted at the Camp Tubman Military Barracks in Bong County. It was during the middle of the training that the Ebola virus outbreak occurred in Liberia. However, The Chinese Engineers remained in Liberia until their mission was concluded. 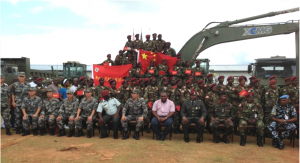