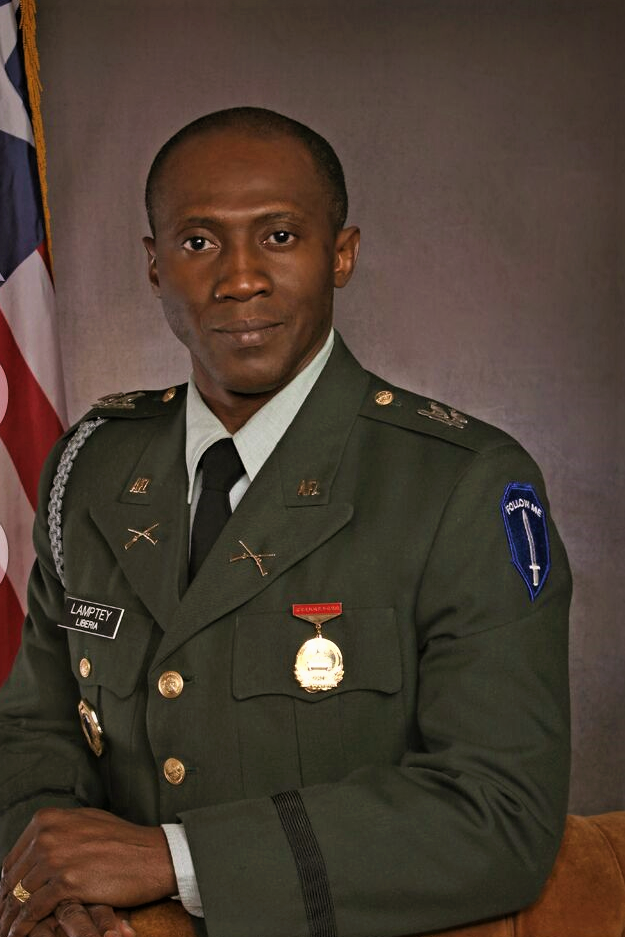 CPT Eddie P. Lamptey of the Armed Forces of Liberia (AFL), as a part of nearly 1,200 officers graduated from the U.S. Army Command and General Staff Officer Course on June 9, 2017 with a Military Masters of Arts and Science (MMAS) degree from the United States Army Command and General Staff College(CGCS), Fort Leavenworth, Kansas, United States of America.

In addition to completing the graduate-level course, approximately 139 students were awarded the Master of Military Art and Science Degree. Students earn the master’s degree upon successfully completing the Command and General Staff Officers Course, an oral comprehensive exam, and writing and orally defending a thesis based on an original research. The College is accredited by the Higher Learning Commission of the North Central Association of Colleges and Schools to award the master’s degree.

Captain Lamptey was awarded a Military Masters of Arts and Science (MMAS) degree and the International Officer Graduate Badge for his research on “Security Sector Reform in Liberia: Progress and Challenges Ahead of United Nations Mission in Liberia (UNMIL) Drawdown.” He also completed a Masters of Art in International Relations from Webster University.

Since 1961, CPT Lamptey has become one of the 39 officers of the Armed Forces of Liberia to have obtained double Masters after completing studies at the CGSC.

The 10-month Command and General Staff Officers Course develops war-fighting and adaptive leadership skills necessary for military officers to be proficient in Unified Land Operations. The College is an educational center of excellence renowned in the study of leadership, the conduct of joint and combined land warfare, and the application of Joint, Interagency, Intergovernmental, and Multinational organizations to synchronize all elements of power to achieve national objectives.

Meanwhile, Captain Lamptey has expressed gratitude to the Commander-in-Chief, the Minister of National Defense, and the High Command of the AFL for affording him the opportunity to seek higher education. “With my new credentials, I will contribute immensely towards the development of the AFL and Liberia at large,” he stated.