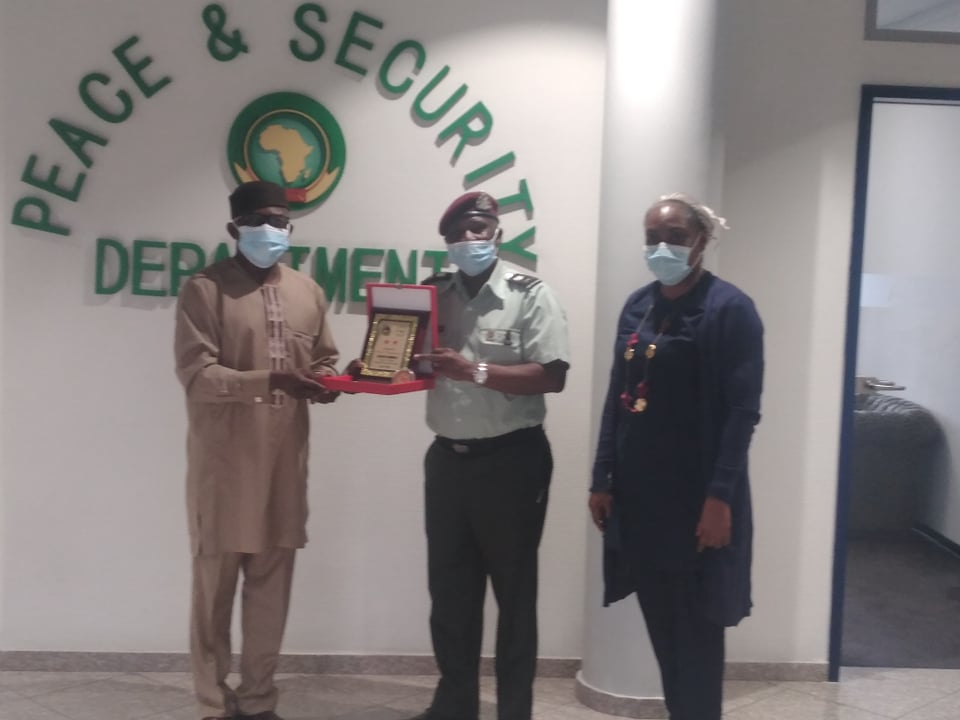 ADDIS ABABA, Ethiopia – May 11, 2021: The newly-elected Commissioner of the Department of Political Affairs, Peace and Security of the African Union, Ambassador Bankole Adeoye, has assured the Armed Forces of Liberia (AFL) of Liberia’s participation in both Peace Support Operation and Military Support Operation of the African Union (AU) once the new structure comes into force, in July 2021.

The Commissioner gave the assurance when Liberia’s Military Attaché and Permanent Representative to the African Union Commission (AUC) and United Nations Economic Commission for  Africa (UNECA), Colonel Davidson F. Forleh paid him a courtesy call. Commissioner Bankole Adeoye further stated that under his tenure as Commissioner for Political Affairs, Peace and Security, he will foster close and cordial working relations with Liberia. He further assured that he will work assiduously towards opening a corridor where Liberian military officers will be given the opportunity to serve in the Commission.

He also recounted with admiration the courageous service of Ambassador Bankole Adeoye, the newly-elected Commissioner of the Department of Political Affairs, Peace and Security of the African Union for his dedicated effort in the consolidation of peace and security on the African Continent.

Military Attaché Forleh, also during the courtesy call, presented a plaque of appreciation on behalf of the Chief of Staff and the gallant men and women of the AFL and asserted that his office, stands ready to work with the Commission through the Department of the Political Affairs, Peace and Security in contributing its expertise in the areas of conflict resolution, post conflict reconstruction and development and the consolidation of peace.

Colonel Forleh, following his presentation, used the occasion to request Liberia’s participation in both Peace Support Operations and Military Staff Support to the African Union Missions.

He also informed the Commissioner that the AFL has gone under rigorous and professional training since its restructuring in 2006 to present. This, he said, has led to the participation of the Force in the United Nations Peacekeeping Operation in Mali and other Missions on the Continent.

He further averred that Liberia also served as Member of the African Union Peace and Security Council in 2018, for a period of two years, as Chair of the Military Staff Committee.