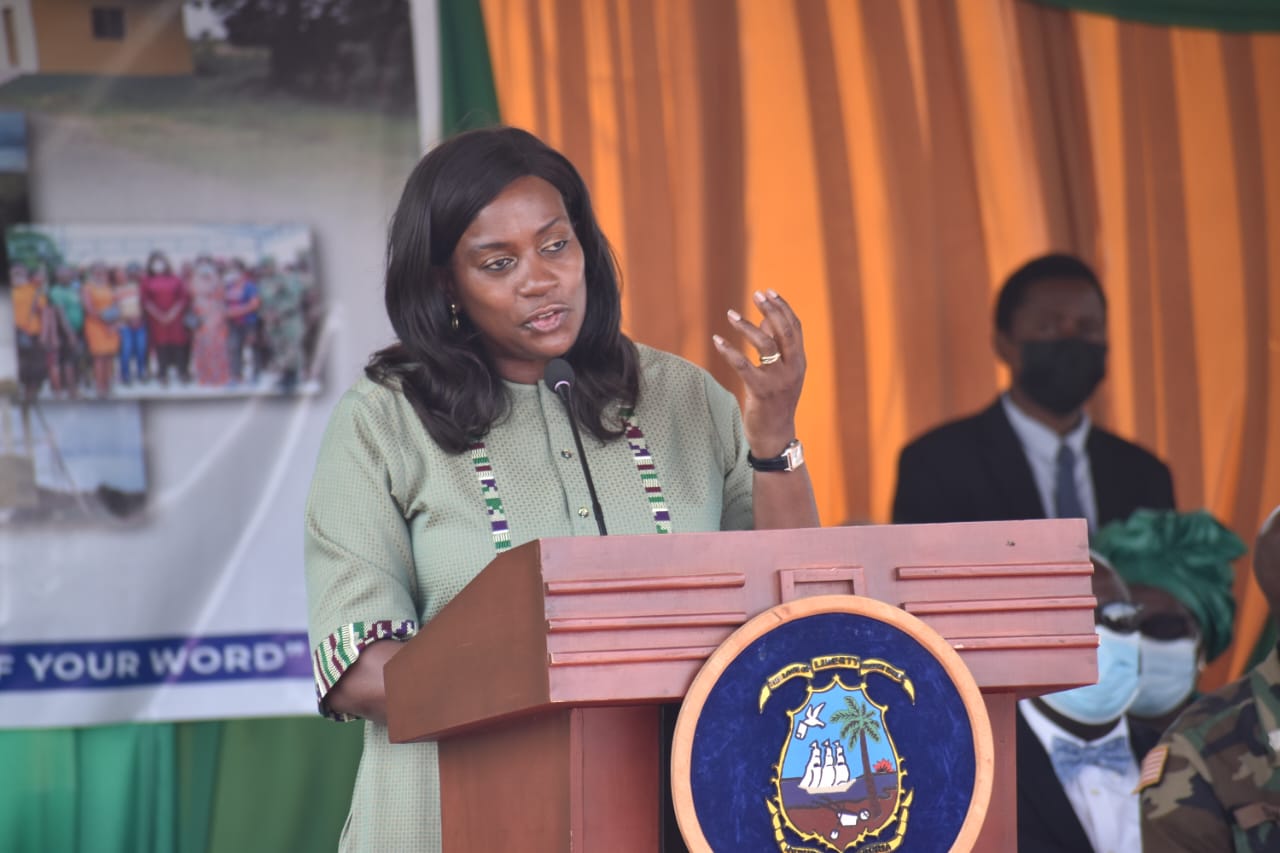 BARCLAY TRAINING CENTER, MONROVIA- 13 APRIL 2022: The First Lady of Liberia, Madam Clar M. Weah, has made good the promise she made to the Army Wives Association by dedicating and turning over a Vocational School worth over One Hundred and Twenty Five Thousand United States Dollars (125, 000).

The construction of the school came as a result of a visit made by the First Lady in February 2020, following a request from the Army Wives Association.

Speaking at the dedication ceremony held at the Edward Binyah Kesselly Barracks along the Robertsfield Highway, Madam Weah expressed joy in the fulfillment of her promise, stressing that the empowerment of women is a key component of national development.

“Today, I have returned to fulfill my promise. And, in the fulfillment of this promise, we desire to move our Army Wives from the valley of despair to a buoyancy of new hope.  Hope that will remind them that they are an integral part of who we are as Liberians and that their support to their spouses, our Men in Arms is much appreciated,” she further emphasized.

“Women are the roots of a nation, and when they are empowered, they can spread their roots which help them live independent lives,” she said.

According to a Ministry of National Defense Press Release, the Liberian First Lady admonished the soldier’s wives to remain focused and used the facilities for their upliftment and benefits.

The First Lady then pledged an additional Ten Thousand United States Dollars to purchase additional equipment for the school.

Speaking for the Ministry of National Defense, the Deputy Minister for Administration, Honorable Tibli Olandrus Dickson, lauded the Liberian First Lady for the gesture, adding that “The wives of the soldiers play a pivotal role in the lives of the soldiers who are usually on a mission.”

Deputy Minister Dickson said the construction of the Vocational School will further enhance the capacity of the soldiers’ wives, and urged them to make use of the facilities for their personal growth and development.

The support the soldiers get from their wives makes them mission-ready, adding that “The soldiers’ wives are not beggars, but are entrepreneurs”.

In remakes, the President of the Army Wives, Josephine Kowo, said the completion of the vocational school was a dream come true for the soldier’s wives, adding that the school will help in making them independent by the skills they will acquire.

This facility, valued at over One Hundred and Twenty Five Thousand United states Dollars comprises the main training building with classrooms, an office building, a meeting hall, and a reservoir  for safe running water to the facility.  In addition, the First Lady has provided a refrigerator, freezer, 15kva generator, a commercial oven for baking, office furniture, and several chairs among many other essentials for the facility to further enhance the practical aspects of the training program for our Army Wives.

The dedication ceremony was attended by the President of Liberia, George M. Weah, and other officials of government.