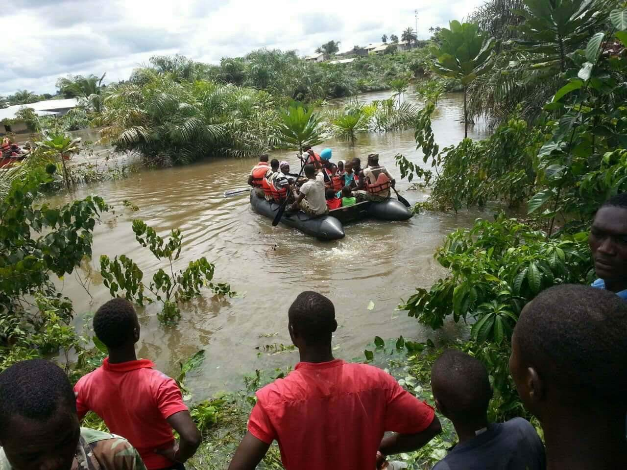 Kakata, Margibi County: The Armed Forces of Liberia (AFL) in a time sensitive manner on Thursday, September 14, 2017, through a deployed section of the Liberian Coast Guard (LCG), successfully ferried approximately 200 trapped individuals, mainly children, women and the elderly, who had been cutoff in a flooded Dennisville Community in Central Kakata City.

According to the LCG Commander, water and food are urgently needed for those trapped in the flooded areas. The move by the rescue team was an immediate intervention in response to the natural disaster which has affected several thousand residents in the hardest-hit Dennisville Community. The LCG launched two of its boats; Zodiac 450 and an engineering boat to transport affected individuals to safety. Although, there is no initial report of fatality, there are reports of about six buildings already demolished as a result of the floods that have now left several thousand worth of properties damaged with people being internally displaced. The physical and psychological deportment of the affected people call for accessorized assistance from any and everything including first aid treatment, food, personalized household effects, shelter, among others.

Eye witnesses and a member of the Margibi County Legislative caucus have confirmed reports that other areas including Weala, Bong Mines Road Community, Kissi Community, Miss Moore Community and Mandingo Quarter have also been affected by flood waters. As the disaster is being monitored, the residents of the other affected communities are sending out SOS (emergency) call for the quick intervention of the AFL as well as other humanitarian organizations to move swiftly to mitigate the already troubling situation from getting worse within the next few hours as areas continue to experience down pour of rains.

Meanwhile, the Deputy Chief of Staff of the Armed Forces of Liberia, Brigadier General Prince C. Johnson, III, has commended the rescue team for its timely initial intervention that rescued several victims without report of any incident. Following the nearly 24-hour mission, the rescue team has since retrograded to base and presented its SITREP (situation report) through the Chain of Command, awaiting further instructions.

In a related development, the Chief of Defense Staff of the Armed Forces of Liberia, Major General Daniel D. Ziankahn has expressed regrets for the suffering of those being affected by the flood waters in Margibi County and assured that the AFL, as a “Force for Good”, will continue to work within the limits of its meager resources, as part of its statutory obligation, in serving the Liberian people especially in time of distress. According to the New National Defense Act of 2008, Section 4.4 (a) intimates that “In accordance with the order to render aid to distressed persons, vessels, and aircrafts, on the high seas and waters over which the Republic of Liberia has jurisdiction and also with the view to rendering assistance to persons and property imperiled or endangered by floods and wrecks, the Liberian Coast Guard shall,: 1. Perform any and all acts necessary to rescue, aid persons, and protect and save property.