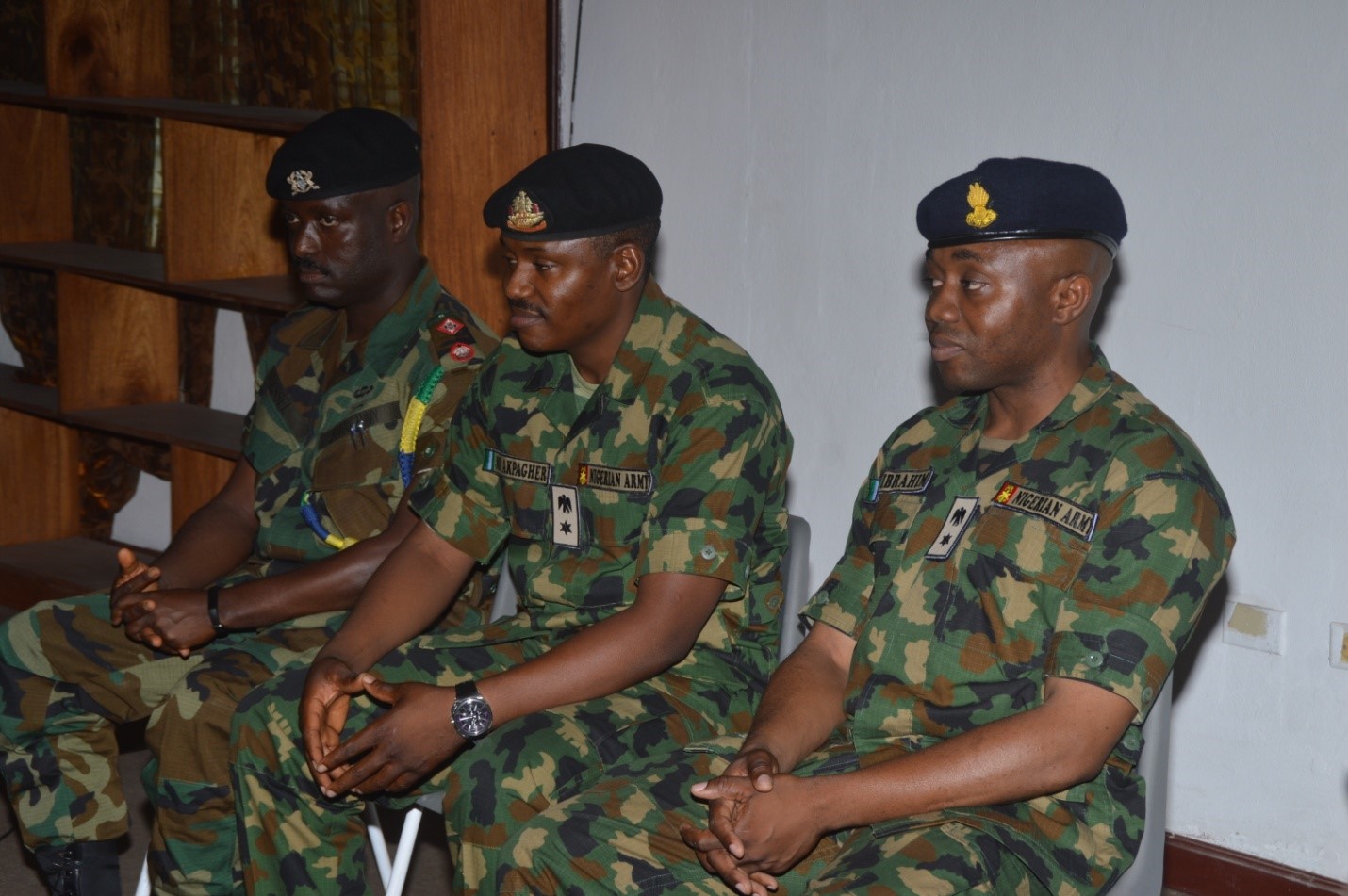 Barclay Training Center, Monrovia- November 15, 2017: The Armed Forces of Liberia held a pinning ceremony to commemorate the promotion of three distinguished officers of the ECOWAS Advisory Training Team (EATT) assigned to AFL on 13 November 2017 at the AFL Headquarters’ conference room. .

Lt. Col. SS Ibrahim and Lt Col. ND Akpagher, from the Nigerian Army, and Lt. Col. NYS Essel from the Ghana Army were officers pinned. They are experienced ECOWAS Advisors providing valuable expertise and sharing experiences in the area of training and other strategic decision making within the AFL.

Major General Daniel D. Ziakahn, Jr., Chief of Staff of the AFL, pinned the officers. He was assisted by Colonel EO Oduyebo, head of EATT, and Lieutenant Colonel Marc Saphir, US Defense Attaché.

Gen. Ziakahn, on behalf of the AFL, expressed his sincere felicitations to the promoted Officers. “It is a testimony of the work you have done,” he said. He also thanked them for their contribution to the growth and development of the AFL.

Lt. Col. Simbabi Suleiman Ibrahim currently serves as Engineer Advisor and Mentor at the Camp Tubman Military Barrack, Bong County. He was admitted into the Nigerian Defence Academy, Kaduna in 1999 as a member of the 51 Regular Course. He graduated in 2004 and was commissioned to the rank of second lieutenant in the Nigerian Army Engineers.

He holds a Bachelor Degree in Civil Engineering and two Masters Degrees; one in International Affairs and Defence Studies and the other in Conflict, Security and Development. He is also an associate member of the National Institute of Management. In addition, he has the Forces Service Star, Foreign Training Assistance Medal, General Operations Medal, United Nations African Mission in Darfur Medal, United Nations Mission in Liberia Medal and the prestigious Passed Staff Course brooch.

Additionally, Lieutenant Colonel Ngusha David Akpagher now serves as the Training Advisor and Mentor at the Armed Forces Training Command. He attended the prestigious Nigerian Defence Academy as a member of 51 Regular Course and graduated in September 2004 and was commissioned 2nd Lieutenant. .

He has attended numerous military courses in his career. He holds a Bachelor of Science honours in economics, diploma in maneuver warfare and a master in war studies maritime from the National Defence University Islamabad Pakistan.

Lt. Col. Essel graduated from the Kwame Nkrumah University of Science and Technology, Kumasi – Ghana with a Bachelors degree in Economics and Law. He also holds a Masters degree in Defence and International Politics from the Ghana Armed Forces Command and Staff College.

As part of his distinguished service both home and abroad, he has held several appointments, which includes Adjutant, Intelligence Officer, Battery Commander and Chief Operations Officer. Until his deployment to Liberia as part of ECOWAS Advisory Training Team of the Armed Forces of Liberia, he was the Assistant Director Army Operations at the Ghana Army Headquarters.

With Officers from Nigeria, Ghana and Sierra Leone, the EATT has played a major role in the training and professional development of the AFL since it was restructured in 2006.