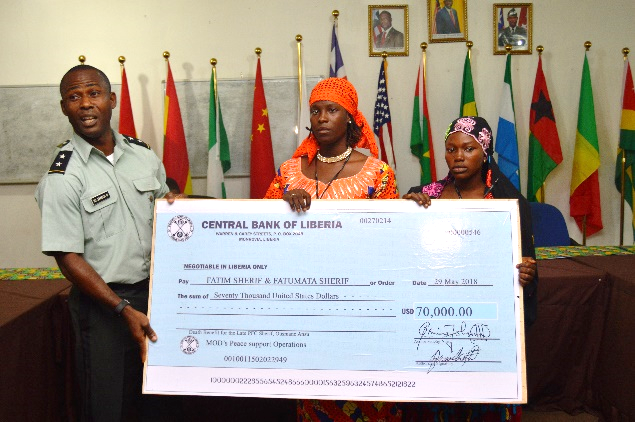 The authorities of the Ministry of National Defense and the High Command of the AFL of Liberia on Tuesday, May 29, 2018, presented a check valued Seventy Thousand United States (70,000USD) Dollars to the next of kin of the late Pfc Ansu Ousmane Sheriff of the Armed Forces of Liberia, Fatim Sheriff and Fatumata Sheriff, wife and daughter of the deceased. The check is an international peacekeeping death benefit from the United Nations.

The Chief of Staff said that the presentation brings to a close several benefits that the next of kin have received from the Ministry of National Defense and the AFL which includes death benefit, the fallen soldier’s compulsory saving and insurance benefit.

Speaking on behalf of the Minister of National Defense, the Deputy Minister for Administration, Honorable Tibli Olandrus Dickson, thanked the next of kin and family members of the fallen soldier for the numerous sacrifices that the late Ousmane Sheriff made in serving his native land and protecting international peace. He also said that in the past, other countries made similar sacrifices during the heat of our civil crisis. Therefore, it is an honor for Liberia to be reciprocating the same.

In response, Mr. Baokai Sheriff speaking on behalf of the next of kin, thanked the authority of the Ministry of National Defense and the AFL for standing with them during the time of their bereavement. He said normally, it is expected for children to bury their parents, as such, it is unbearable for the family to have buried their son. But whatever that had happened is the will of the Almighty Allah.

It can be recalled that Pfc Ansu Ousmane Sheriff died on May 3, 2017 as a result of multiple mortal shell attack by Malian rebels on a UN Peacekeepers’ base in Sector West, Timbuktu, while on peacekeeping mission duty in Mali with the United Nations Multidimensional Integrated Stabilization Mission (MINUSMA). 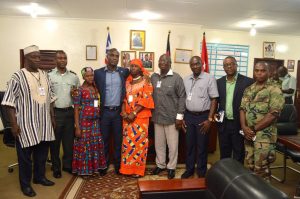 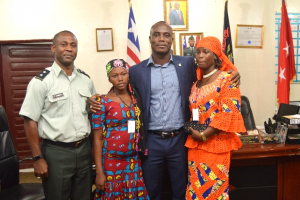