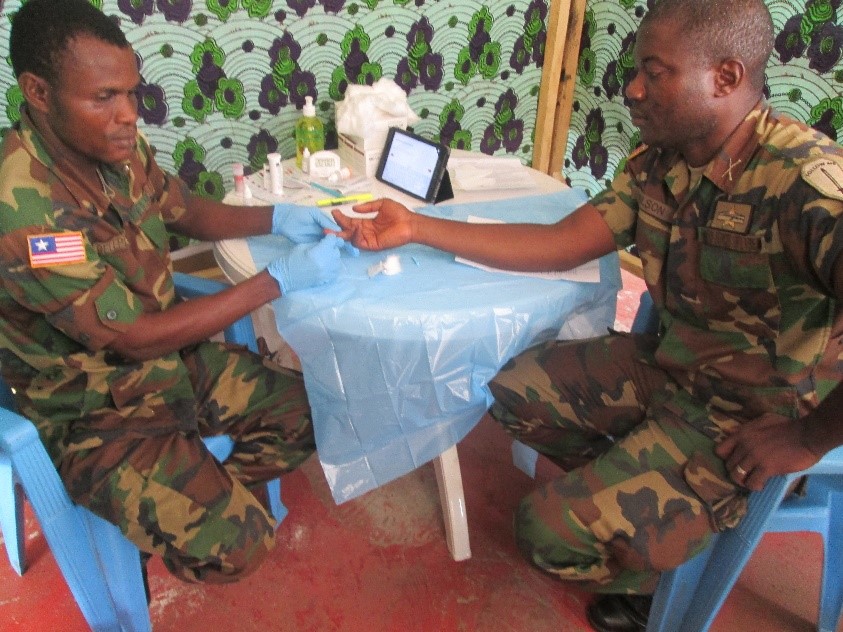 The survey is being done in collaboration with Research Triangle Institute (RTI) International to determine the HIV prevalence and other STIs in the AFL. It started on April 20, 2018 and will end on June 4, 2018.

It covers all AFL active duty soldiers and their spouses. The soldiers and their spouses are providing blood and urine specimens to be tested for HIV and other STIs.
Speaking on the timeliness of the survey, Lt. Colonel Theophilus A. Dana, Brigade Commander, AFL, said that troop’s readiness now is one of the major concerns in the AFL because it is enshrined within the Chief of Staff’s vision for the AFL. “Our soldiers need to be fit and mission ready at all times and we want to encourage every soldier and his/ her spouse to be part of the process,” he emphasized.

“The entire leadership of the AFL is very impressed to see this happening in the AFL for the very first time and will like to see this happening periodically,” the Brigade Commander further hinted.
While addressing the troops on the relevance of the survey, Major Joseph Kowo, Head of AFL Medical Command, motivated the soldiers to take their health into their own hands and to avail themselves for the exercise.

“The findings of this survey will help us know the prevalence of HIV/ AIDS, Claymedia and other STIs in the AFL, assess your behaviors and make policy decisions that will motivate our partners to give more support,” he said.

Speaking to a team of reporters, Mona Sankoh (Mrs.), DHAPP Program Manager, said that the initiative is very important to the AFL and it will help informed the DHAPP on what strategies to employ in addressing health issues within the AFL. She also hailed the cooperation being received from the AFL in terms of providing its own medical personnel and logistical support for the entire survey.

Also, Mr. Stan Ito, DHAPP Desk Officer for Liberia, said that the people of the United States along with the Department of Defense and the Department of State believe that it is important investment into Liberia- to keep the its people healthy and to keep soldiers of the AFL healthy.

He said working along with the AFL over the years has brought him high pleasure and honor. Mr. Ito admonished the AFL to work to increase its capacity and ability to provide for her own personnel. He also commended the AFL for providing the medical personnel to help conduct the survey.

The Department of Defense HIV/ AIDS Prevention, Care and Treatment Program (DHAPP) of the United States Embassy is a program organized to assist with the maintenance of health troop of the AFL with respect to HIV/AIDS. Established in 2008 and became active with the AFL in 2009, its main objective is to ensure an HIV/ AIDS free military ready to defend and execute missions in and out of Liberia.