A HERO IS LAID TO REST

Monrovia-Liberia: The late Corporal Sheriff, Ansumana Ousmane was laid to rest on May 11, 2017 at the Voinjama Islamic Cemetery in Voinjama City. A United Nations flight from Bamako, Mali brought his remains to Liberia at about 12:00 noon on May 11 in a casket bearing a United Nations’ Flag.

Right after a brief military ceremony at the James Spriggs Payne Airfield, the body of the late Sheriff, A. Ousmane was taken onboard another UN Aircraft to the Voinjama Central Mosque, Voinjama City, Lofa County, at which time Islamic burial rites were performed subsequent to his burial.

The late Corporal Sheriff A. Ousmane was a 2008 graduate of the James Doe Young Assemblies of God High School, Clara Town, Monrovia. He was enlisted into the Armed Forces of Liberia on March 8, 2008. He completed his Initial Entry Training (IET) on April 26, 2008. Beginning April 20- May 23, 2008, he completed his Advanced Individual Training (AIT).

The late Corporal Ousmane, on January 31, 2014, received the Soldier of The Month Award, HHC, BDE, Armed Forces of Liberia.

While on peacekeeping mission duty in Mali with the United Nations Multidimensional Integrated Stabilization Mission in Mali (MINUSM), on May 3, 2017, as a result of multiple mortal shell attack by Malian rebels on a UN Peacekeepers’ base in Sector West, Timbuktu, Corporal Ansumana Ousmane Sheriff became the first Liberian soldier killed on deployment. Seven other Liberians were wounded in the bombardment, three seriously so, together with a Swedish peacekeeper.

It can be recalled that in 2013, the AFL deployed a platoon as part of the United Nations Multidimensional Integrated Stabilization Mission in Mali, marking the first time that the AFL had operated abroad since the United Nations Operation in the Congo in the early 1960s.  Initially under Nigerian command, the AFL platoon came under Togo Contingent Command when Nigeria withdrew from the mission. Despite some initial logistical problems the platoon performed admirably, performing patrols and VIP escort duties. The platoon has now seen four rotations: 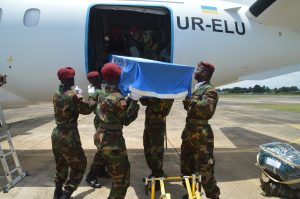 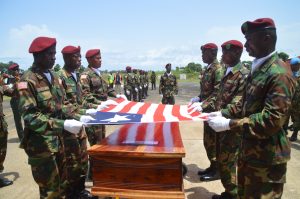 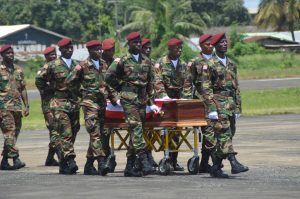 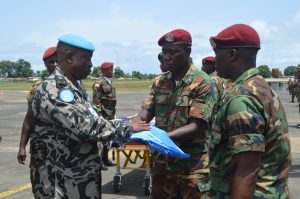