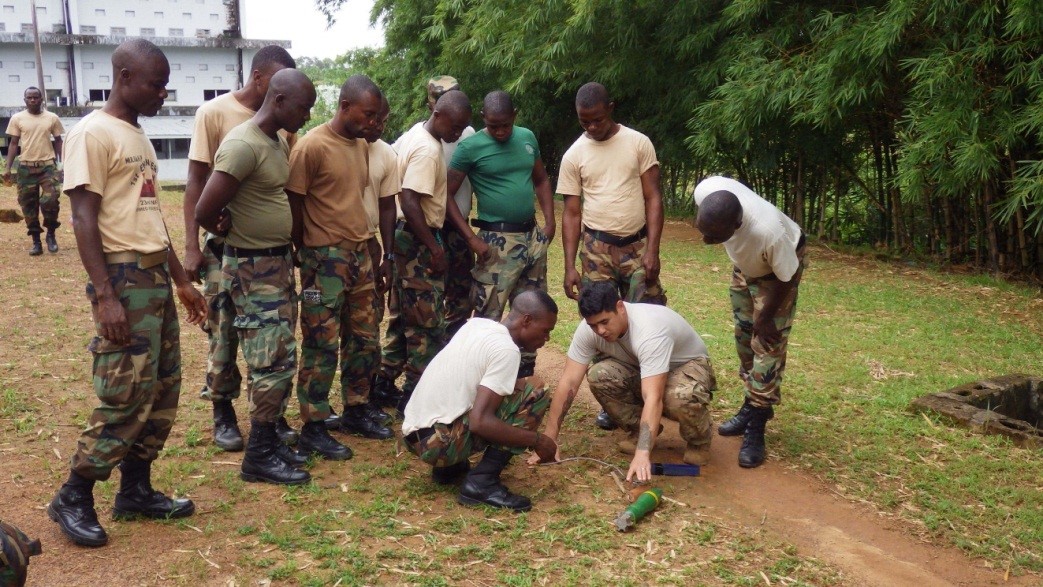 ABERDEEN PROVING GROUND, Md. – Between August and September, Soldiers from the 184th Ordnance Battalion (Explosive Ordnance Disposal) trained Liberian EOD technicians at Armed Forces of Liberia facilities on how to react to an unexploded ordnances (UXO).

The month-long exercise, sponsored by the Office of Security Cooperation at the U.S. Embassy in Monrovia, helped increase the number of trained AFL EOD personnel so that they can react faster within a larger response area throughout Liberia.  The exercise also continued to build defense partnerships between Liberia and the United States.

And while technicians played an important role, other team members served as train-the-trainers, providing AFL leaders with the points of instruction so that they can teach incoming EOD recruits.

According to Zipp, this was the first time for a team from his unit, or any U.S. Army EOD team, to train in Liberia. The 29 AFL trainees he received originally were trained in 2014, but by United Nations’ contractors.

“We achieved our mission objectives,” said Zipp, “which were to increase the EOD skills of the Armed Forces of Liberia personnel in order to strengthen their abilities to respond, mitigate, and dispose of explosive hazards in their nation.”

Zipp also said that increasing the coverage and capabilities of host nation forces to deal with explosive threats has benefits for civilian populations, security and quality of life, and regional stability.

And he could not be more right. According to US Army documents, more than 800 improvised-explosive-device incidents have occurred from March 2015 through Feb. 2016 across the African continent. Extremists target civilians using these methods to create turmoil and fear among in order to destabilize specific regions.
Hence the rise of EOD missions in the region.

“There have been increases of EOD missions in Africa,” said Zipp. “It seems to be mainly because of an increasing concern with the IED threat among the various host nations, although, this mission in Liberia was concerned mainly with explosive remnants of war.”

Although this mission is the first of its type, the 184th Ordnance Battalion has had numerous other missions in support of USARAF (U.S. Army Africa). The battalion has sent other teams to do counter-IED missions in several African countries such as Cameroon and Chad just to name a few.

And while this mission to increase the AFL EOD’s capabilities was not a C-IED training, it will possibly set them up to be qualified to do it at a later date.

Even though Liberians were the ones being trained, they were not the only ones learning. Soldiers from the 184th learned something as well. They got to experience Liberian culture first hand. In fact, no one from the team had been on the African continent prior to this interaction.

“From a training standpoint, other than the obvious experience instructing foreign military forces, it also enabled us to see how different EOD teams work and how they go about doing certain procedures that we do but in a different manner,” said  Zipp.