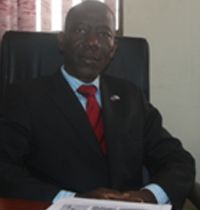 Honorable David K. Dahn is a distinguished graduate of the Security Sector Reform Training Program conducted by the United States DynCorp International. Honorable Dahn started his Civil Service career as Senior Administrative Officer at the Ministry. Later, he was promoted to the positions of Public Affairs Officer and subsequently Director of Public Affairs.

In 2010, her Excellency President Ellen Johnson-Sirleaf appointed David K. Dahn as Assistant Defense Minister for Public Affairs. Honorable Dahn has shown excellent communications leadership by articulating the affairs of the Ministry of National Defense and the AFL in his writings and words whenever duty calls.

Honorable Dahn holds a Bachelor of Arts degree in Mass Communications and Political Science from the University of Liberia and several other local and international certificates in Public Relations, Human Rights, Peace and Security from the Kingdom of Columbia, Kingdom of Sweden, Ghana others. Besides, he is a candidate for master in International Relations at the University of Liberia.